Removing through traffic from the Royal Parks would make them far better for people walking, cycling and relaxing in.

Great news: an overwhelming majority of respondents agree with LCC that parks are for people, not cars. Bad news: despite those results, The Royal Parks are set to meekly roll over the trials of current schemes for another year, rather than make these schemes permanent now, and add to them.

The Royal Parks has received almost 18,000 responses to consultations across changes to five of its iconic parks in London that were subject to trial restrictions to motor traffic over the last six months. And good news is that in every consultation, a strong majority of respondents supported the moves to restrict motor traffic from the park. That’s in part thanks to you and LCC’s campaigning on this issue.

The good news is that means these schemes have a real public mandate to move forward and again people have spoken to say car cut-throughs in parks make no sense. However, the battle sadly isn’t over. As a result of the response, rather than make the schemes permanent, or even increase restrictions as many of us called for, The Royal Parks have rather meekly just rolled the scheme trials over to March 2022 to “collect additional data to ensure a clear picture of the impact of the schemes, before determining whether they should be made permanent”.

The response from The Royal Parks is so weak that it fails to acknowledge that while several sections of road in central London parks are set in the trials to remain closed to motor traffic during the weekends, another section of road on South Carriage Drive is effectively closed 24/7 at the moment as well.

The Royal Parks, custodians of eight of London’s most iconic green spaces launches a public engagement exercise into its future long-term strategy on movement and transport.

The most interesting proposal is that The Royal Parks wants to discourage through motor traffic from using park roads. This could have a massive impact on the parks, and on cycling and walking in and through them.

The Royal Parks releases the results of its initial engagement survey on the principles of its draft Movement Strategy, and Londoners overwhelmingly support them and the Parks’ intention to begin to reclaim parks from cars, for people, walking and cycling.

The survey was filled out by nearly 7,000 respondents. Overall:
85% agreed “changes or developments within… parks should seek to protect, conserve and enhance” the parks;
73% agreed that the Parks should “prioritise walking” over other modes;
79% agreed walking, cycling and using public transport to reach the parks should be prioritised over other modes;
and the biggie: 78% agreed park roads should “not be used as commuter routes for motor vehicles”.

As well as motor traffic, Richmond Park is closed to cyclists due to COVID-19.

The LCC alongside our borough groups in Richmond, Kingston, Merton and Wandsworth, bordering the park, and Regent's Park Cyclists, CPRE London, London Living Streets and Parks for People co-signs a letter to the Royal Parks requesting the decision be reversed.

The Royal Parks publishes its full Movement Strategy, enshrining key principles including “Our park roads are not intended to be primarily commuter through routes for motor vehicles”.

The Royal Parks publishes more details on the first five trial projects to fulfil the strategy, removing through traffic from several of London’s most-loved parks.

After nearly two years, two surveys, thousands of Londoners supporting the proposals and nearly a year of trial traffic restrictions, The Royal Parks still won't make a decision and rolls over the trials of current schemes for another year, rather than make the schemes permanent.

A bad development for action on climate and the pandemic

The Royal Parks has an urgent and serious role to play in London’s response to the climate crisis. Another year without further action is another year of emissions, pollution, road danger, inactivity tolerated in its spaces. And while the Royal Parks claim schemes need to be monitored with post-Covid London traffic levels we would argue the reverse.

If the Royal Parks waits until its remaining through routes clog up with motor traffic from those avoiding public transport, it will choke the potential of these routes for walking and cycling for transport, leisure and fitness. And it will be far harder to reduce through motor traffic with more restrictions later than it will be to stop that motor traffic ever returning to the parks now.

What LCC wants to see next

The full results of the consultations give The Royal Parks a clear mandate, again, alongside their own policies, to act now. To build on the good work of these trials and to move them on this year, not delay and dither. And thats what we’ll keep pushing them to do.

The results in detail

The lowest support rate for schemes was for the removal of through motor traffic from Bushy Park, which faced a concerted campaign of opposition against the proposals from some drivers. Even there, however, 56% supported the trial approach, and the only group responding strongly negatively to the scheme were “those using the park for driving through by car”, 93% of whom opposed changes (disabled visitors did raise significant concerns about access and congestion on surrounding roads, also).

Other parks – overwhelmingly in favour of ending through-traffic

Hyde Park, Green Park and St James’ Park lower level interventions were supported by over 70% of respondents and calls for further restrictions were the “most common theme in the comments”. Greenwich Park’s removal of through motor traffic got 81% support. And Richmond Park saw the largest overall response with nearly 11,000 responses, and 71% overall support (with majority support among the 43% of responses from local residents too). Unsurprisingly the most common comments on Richmond Park were also calls for the total removal of all through motor traffic, with access retained to car parks, particularly for disabled people.

Despite not being one of the listed five parks with schemes, hundreds of emails were also sent to the Royal Parks on the issue of through motor traffic in Regent’s Park too.

This consultation reaffirms what we already knew: Londoners want their parks for people, not through-traffic. We will continue to campaign for preventible road danger to be ended in our city’s scarce green spaces.

Thank you to everyone who joined our action late last year. We will keep you informed of developments on social media, in our free newsletter, and our quarterly member’s magazine, London Cyclist, posted to all LCC members. If you’ve not seen it already, watch the short video showcasing the situation in Richmond Park with vlogger Francis Cade, below. 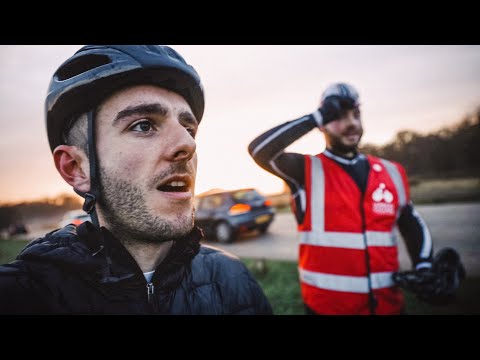