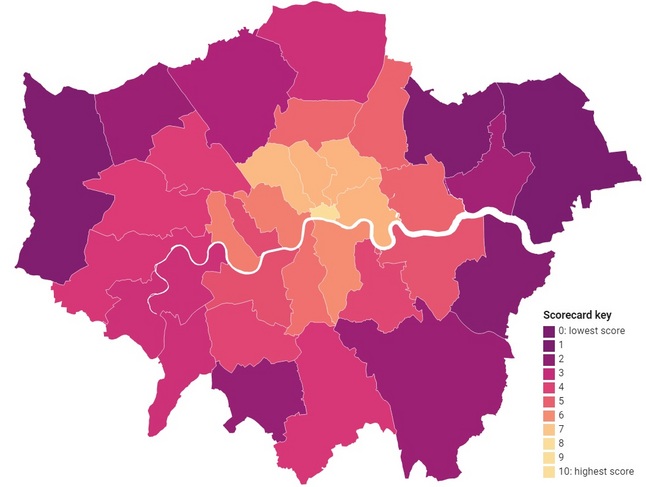 The second annual London Boroughs Healthy Streets Scorecard has been published, covering a year of progress by boroughs on key “Healthy Streets” metrics, to before the arrival of the Covid-19 crisis. The Scorecard was in part instigated by London Cycling Campaign, alongside other active and sustainable travel campaigns.

For the first time, the results allow us to on nearly all measures track not just the overall result of decades of progress (or inaction) by borough, but also progress in the last year comparing to the 2019 report. Unfortunately, the results show that progress on making London's streets healthy and safe is far too slow in nearly all boroughs to meet the Mayor's own targets, let alone the need to deliver #ClimateSafeStreets.

The 2020 London Boroughs Healthy Streets Scorecard reflects the health of boroughs' streets up to March 2020, before boroughs started to put in place emergency measures in response to the Covid-19 pandemic.

While the results don't reflect the incredibly hard work which is going in right now to enable more walking and cycling, they do indicate London is failing to enable enough people to shift away from car ownership and use. One stand-out result, for example, is that car registrations in London reduced by just 268 over one year, compared to the Mayor's Transport Strategy target which is for there to be 12,500 fewer cars per year, every year until 2041.

It remains to be seen if the Mayor's current Streetspace Plan, and independent action by boroughs to enable more walking and cycling, significantly accelerates progress towards higher scores; it should certainly be used as an opportunity to do so. We will need to wait for the results of the 2021 Scorecard to reflect on the outcomes of all this work.

Meanwhile, the coalition say there's a huge amount boroughs could do to deliver substantial change, rapidly, even within restricted budgets, including:

The coalition has launched its new Healthy Streets Scorecard website with easy to use graphs of all the key data.

In terms of the key London-wide outcomes campaigners are tracking, the changes from 2019 to 2020 Scorecard data, show:

Some boroughs score better than others, but all must do much more.

The results also highlight huge disparities on borough action and outcomes even comparing only inner (or outer) London boroughs to each other.

* The City of London scores well in many indicators but it is not primarily a residential borough and it was felt that comparisons with the other London Boroughs may be unhelpful.

The overall score for boroughs is made up of scores for 4 'outcome' indicators and 5 'input' measures. This is the first year the Scorecard includes an indicator on active travel and schools.

The range of results remains very wide for all indicators even when looking just at Inner or Outer London boroughs. And while we hope the scorecard is of great use to our borough groups, particularly in comparing progress, or lack thereof year-on-year, it’s also important to remember these metrics represent only a tiny portion of the data we’d like to be tracking – they are a very incomplete picture.

Quotes from the press release

"We want every borough to do much more. Indeed every borough will need to do much more to meet the Mayor's Transport Strategy and help us avert the worst of the climate crisis, though some council bosses have shown strong leadership and willingness to make changes, for instance in Waltham Forest where they are controlling parking, cutting off rat-runs, limiting speeds to 20mph and putting in protected cycle lanes" said Simon Munk of London Cycling Campaign.

"In the middle of a respiratory crisis, it's incredible to see some London boroughs surging ahead in taking action. But there are still so many that don't appear to connect our chronic car use levels with the horrific outcomes unnecessary car journeys inflict on residents. Pollution-related ill health, climate changing emissions, and road danger disproportionately impact our most vulnerable," said Jane Dutton of Mums for Lungs.

"The pace of change was excruciatingly slow before we encountered Covid19, with little or no progress in many if not most parts of London, even though we're facing air pollution and climate crises. Boroughs are now working hard to put in emergency measures to make sure people can walk and cycle safely as we emerge from lockdown, and that's great. But our council leaders need to be much bolder and continue to make major changes in the coming years," said Alice Roberts of CPRE London.

"Some boroughs are starting to make the right moves, removing heavy traffic from residential areas, cutting off rat-runs and putting cycle lanes on main roads. But others are really not yet out of the starting blocks," said Jeremy Leach of London Living Streets.

"There's no reason for delay and many reasons to crack on, not least the shocking levels of casualties on our roads. We want our local politicians to be unflinching and for Londoners to get behind them and support change," said Victoria Lebrec of Roadpeace.