A notoriously dangerous junction on Theobalds Road and Southampton Row has been upgraded: but this junction is still unsafe.

From fatality and protest to action

Following LCC’s petition and protest after the death of Dr Marta Krawiec, at the junction of Theobald’s Road and Southampton Row, a junction known for years to be lethally dangerous for cycling and walking, TfL and Camden Council have now installed a new temporary scheme to reduce danger to cyclists, which was delivered over the first weekend of October 2021.

This shows not only that TfL and London’s councils can move really fast when they want to, but the scheme itself will hopefully reduce danger at the junction significantly. Simon Munk, our Campaigns Manager, was at the junction earlier this week to assess the new temporary measures; we’ve fully subtitled it and you can watch it below. 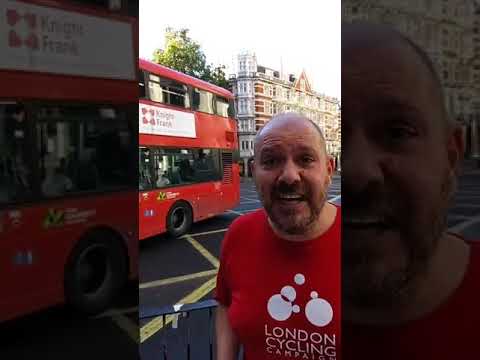 What has changed at the junction?

Camden Council and TfL have replaced the middle of three southbound lanes with kerbing (an ‘island’) separating the ahead lane and the left-turn lane. The aim is to stop left-turning vehicles turning wide across the lane and colliding with cyclists moving straight on. And so far, this does seem to be working – with the vast majority of drivers now in the correct lane, and with cyclists also able to get to new ‘ASLs’ to be in the right place not to get hooked.

The guardrails hugging the corner are also due to be removed soon too. Another welcome and rapid intervention. But does the temporary scheme go far enough? No.

Danger remains at this junction, and many more

Since 2008, seven cyclists have lost their lives at this junction and despite the new improvements, it remains a dangerous junction. Spend just five minutes at the junction and you are guaranteed to see a near-miss from drivers making right turns now straight across flows of those cycling. And of course, remaining risks at this junction in Holborn aren’t the only issue.

The Holborn one-way system itself has several other untreated and lethal junctions within 200m of this one. The route we rode for our protest from Old Street sees more dangerous and lethal junctions, known for years to be an issue, also untouched. And across London we know there are far too many dangerous junctions that need to be made safe for cyclists, but year after year are ignored.

What needs to change to end danger at junctions

No one should have to die because of poorly designed infrastructure that is just accepted as ‘the way it is.’ No one. So let’s work together to create change. If you want to see the end of dangerous junctions half as much as we do, please sign our petition, calling on Mayor of London Sadiq Khan and cross-body organisation London Councils, to make good on delivering the ‘vision zero’ of no pedestrian and cyclist deaths and serious injuries on London’s road network by 2041. We are getting close to 10,000 signatures and we’ll be handing it in this month (October 2021) – so let’s get the numbers up high enough politicians can’t ignore them!

Cycling Infrastructure
Road Danger Reduction
Sign The Petition
We use cookies on our website to give you the most relevant experience by remembering your preferences and repeat visits. By clicking “Accept All”, you consent to the use of ALL the cookies. However, you may visit "Cookie Settings" to provide a controlled consent.
Cookie SettingsAccept All
Manage consent