TfL has announced the Euston Road cycle track is to be removed. We believe this is a step backward for action on cycling, road danger & climate...

Why removing Euston Road scheme is a bad idea

TfL is set to remove the remaining eastbound section of cycle track on Euston Road “this summer”, following its removal of the westbound track just over a year ago. TfL says removal will be due to “significant increases to bus journey times” & because the roadspace that is currently used for cycle tracks will be “required for HS2 works” anyway.

A one-way scheme on a relatively short stretch of road with partial junction treatments was hardly the best cycling scheme on the planet, but its removal will be a retrograde step for London nonetheless and leaves a big gap in the cycle network with no clarity as to how TfL intends to fill it. But more, it means more road danger under a Mayor committed to a #VisionZero of no serious or fatal collisions in London (by 2041). As long as TfL continues to ‘balance’ capacity for road users for each scheme so taxis, private hire, private motor vehicles, buses all take priority over cycling and walking, the Mayor’s targets on Vision Zero & the climate crisis will remain unreachable. And the manner of this removal and its announcement are worrying and puzzling also. TfL’s actions here raises questions that demand answers, as we detail below.

The Mayor has commissioned modelling to investigate pathways to get to net zero emissions in London by 2030. For roads transport, the conclusion is we need to reduce road km driven by 27% by 2030 to get there. That means putting an end to bus versus cycle battles for space & instead reduce capacity for other modes, fast, now. We cannot plan for many years’ delay to schemes that enable safe walking and cycling, and/or that ignore the urgent need to reallocate roadspace away from private motor vehicles, just because of HS2. HS2 works instead represent an ideal opportunity to make bold changes to roads around Euston Station.

We have seen no sign of HS2 understanding the priority need to enable walking and cycling around the Euston sites. Nor any real willingness from the organisation to engage with stakeholders. But also, there is little clarity from TfL’s announcement and approach that trialing different road layouts during HS2 works or even before them to keep the cycle track while reducing bus delays was considered. We don’t even know from the announcement when HS2 intends to take roadspace – just that the tracks will be removed later this “summer”.

TfL has in effect told us little to nothing about what impacts the scheme was causing, that it has identified clearly it was the cycle track and not rising motor traffic volumes in the area for instance, or what mitigations were considered; and neither TfL nor HS2 have clarified yet what, if any, alternative temporary approaches during HS2 works were considered. We understand that HS2 works that require roadspace will take ‘years’. And all of this is to a backdrop of required rapid cuts in private motor vehicle use, and in collisions. Neither of which appear to have factored into this decision.

TfL suggests removing cycle tracks on Euston Road is acceptable for cycling because Tavistock Place tracks are only a “short distance” (400m) away to the south. Except TfL unsurprisingly mentions nothing to the north. Train tracks, canals and other physical barriers mean that in both directions, a continuous east-west route is hard to achieve. But even accepting the Tavistock Place route as being acceptably close to Euston Road to the south, the issue then is for TfL to achieve its planned density of cycle grid, it would need another route at most 400m north of Euston Road. This is physically an impossibility, basically. On top of this, the scheme obviously was never really connected to any other routes, and now, even heading south of the scheme to Tavistock Place is not an ideal alternative either – for connections to anywhere near Euston Road.

With no easily viable east-west cycle routes north of Euston Road for a far greater distance than 400m, a short-term issue for Euston Road and buses means a long term failure of the cycle network for TfL.

As a result of the distances involved to ‘nearby’ alternative routes, people were cycling on Euston Road prior to the scheme going in – indeed, one of the issues with the scheme as it stands today is in failing to deal with junctions along the route appropriately and then removing the westbound track before most people were cycling in central London again much, or the traffic even returned to pre-pandemic levels, the scheme was clearly primarily used by those who already cycled on the Euston Road anyway. But that isn’t an insignificant number – and those people will keep cycling on the Euston Road. They are unlikely to divert to Tavistock Place. And they are unlikely to stop cycling. But now they’ll be cycling with HS2 lorries in more constrained, hostile and dangerous roadspace. Roadspace that prior to the scheme was already far too dangerous.

Map of collisions on Euston Road for pedestrians and cycling, ten years, serious and fatal 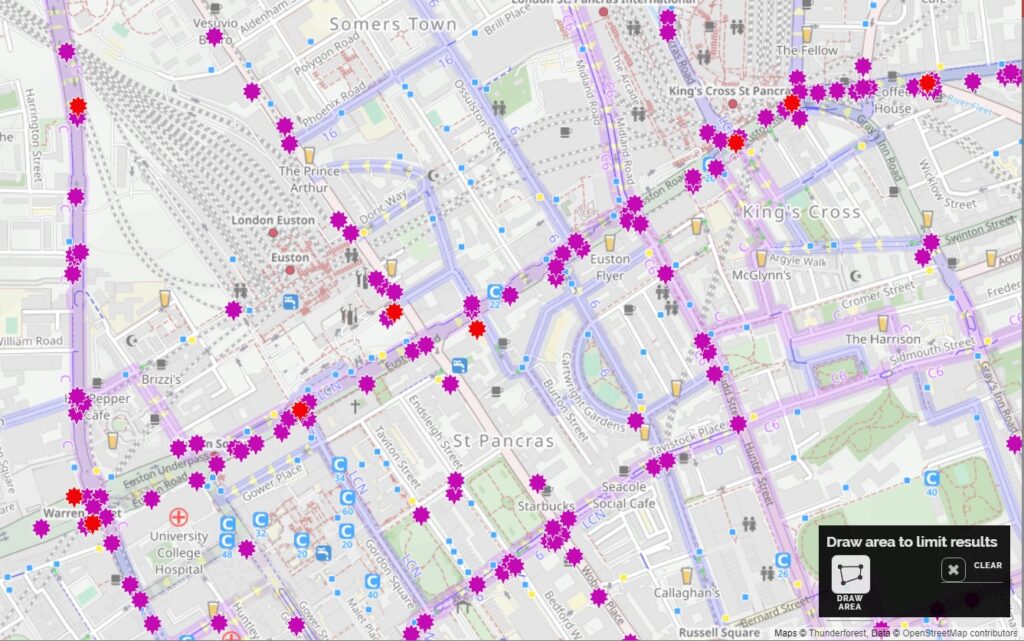 The same issue is also true for north-south connections. Leaving Euston Road out of the equation for years means dangerous, lethal even, junctions on the Euston Road will almost certainly remain dangerous for a decade. This approach really risks the Mayor’s ‘Vision Zero’ approach. The ‘Euston Circus’ junction at the western end of the scheme is already heavily impacted by HS2 works and the changes at the end of Tottenham Court Road there – there is no sign from TfL this will be fixed anytime soon. At the other end of the scheme, what of the lethal King’s Cross gyratory system? King’s Cross has long been promised action, but a recent fatality has seen little response thus far and the area is one of the key focuses of our Dangerous Junction campaign. Action at either end risks being delayed by a failure to deal with Euston Road.

Of course, the removal of the cycle track and HS2 works doesn’t just mean bad news for mode shift, and therefore climate emissions and it doesn’t just mean bad news for road danger for cycling. HS2 works traffic and untreated junctions don’t just impact cycling safety – but pedestrian safety too. Several junctions on Euston Road are already far too dangerous for pedestrians as well as those cycling. Failing to make changes now risks not just lives of those cycling.

Every time TfL puts walking, cycling and cutting motor vehicle use to the bottom of the pile, #VisionZero & climate targets are undermined and people will be hurt or worse. Part of the issue here is that TfL urgently needs to stop approaching each scheme in isolation. London needs to think big – like Hidalgo in Paris. There is no way we can rapidly and boldly reduce private motor vehicle use without holistically accepting change is difficult and sometimes TfL Buses will be temporarily impacted. What we need is an urgent plan to ensure buses work and are popular, but also that we can deliver coherent, safe and comfortable walking and cycling networks. And that means if we don’t want cycling or buses to lose out, private motor traffic must.

In the case of Euston Road this approach would mean working with HS2 to trial a temporary layout with protected space for cycling while developing a permanent scheme that delivers for walking, cycling & buses (not private cars). And it means safety & emissions cuts have to be a priority. We think TfL has got it badly wrong on Euston Road, and has taken a step back when it needs to be running faster forwards on climate, cycling, walking, road danger. If the Mayor’s targets are to mean anything, we need a bolder future, not delays and schemes removed.

The announcement TfL has put out leaves some urgent questions unanswered that we are now asking of TfL, HS2, the Mayor and his deputy. With schemes of this magnitude, transparency is vital – as is clarity as to how scheme by scheme decisions fall within the parameters of policy London has. We ask the following on that basis: 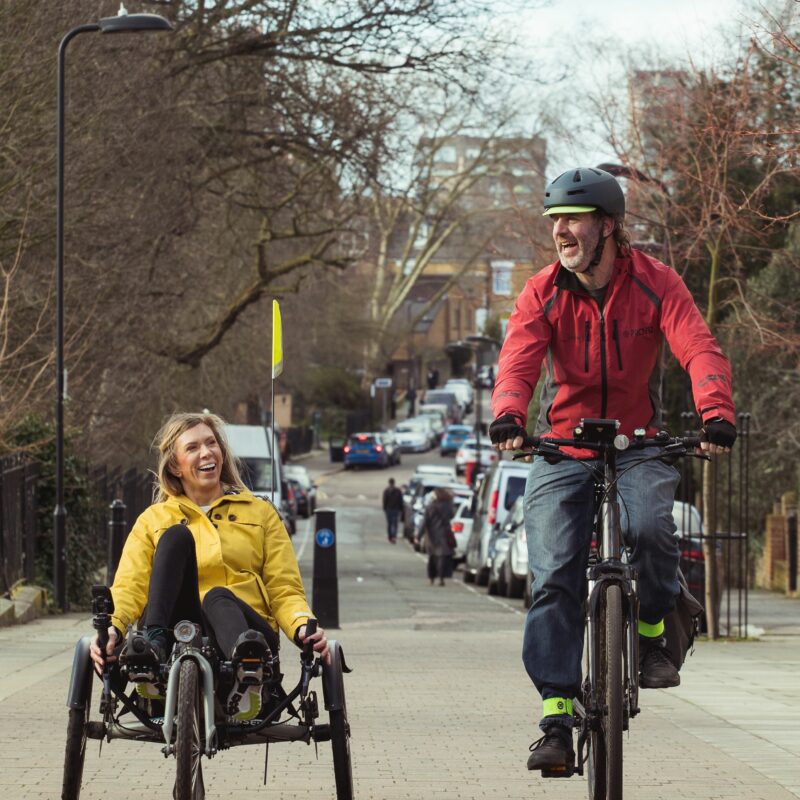