LCC Patrons are a group of highly passionate supporters working together to change the future of cycling in London.

LCC recognises the importance and ongoing support the Patron Network provides to the organisation. We send regular updates on the inner workings of LCC and meet regularly with the network to discuss the latest campaigning activity and how they might want to get involved. We aim to ensure our patrons get as many opportunities as possible to experience the campaigns and projects that their donations support.

LCC has ambitious plans for the next five years which can’t come to fruition without our patrons’ support. If you want to know more, please get in touch, we’d love to hear from you. For more information about how to become part of the Patron Network please email lucy.cooper@lcc.org.uk

In recent years the patrons have been an integral part of some essential LCC projects. Opening up their address books for networking events, giving us access to high quality event, meeting and dining space. They have spoken at events and chaired important meetings.  They have provided vital seed funding for new campaign ideas before we get backing from major corporates or grants. Their support during the pandemic has been invaluable helping us increase our campaigning capacity. This funding, has given us the sure footing we need to campaign effectively into 2021 and beyond.

LCC is aiming to grow and develop the Patron Network so that people can help us achieve our aims for cycling in London. We need to boost our campaigning capacity so that we can:

If you want to become part of a network that will help initiate great change, then why not join the LCC Patron Network? To find out how contact Lucy Cooper.

My Journey with LCC 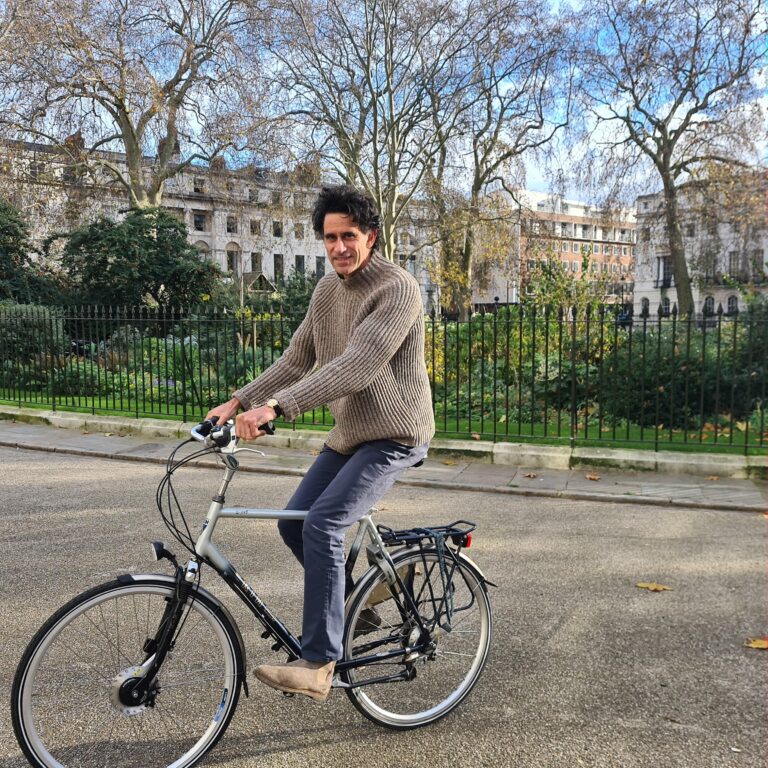 My journey with LCC started in the early 90s, when I first came to London and realised that cycling was the fastest, cheapest, and most reliable way to get around London. I was just a regular member for over a decade when in 2005, a colleague and dear friend of mine was tragically killed in a bicycle accident in Clerkenwell, right around the corner from our offices. Sadly, we have had similar accidents (involving HGVs) recurring with disturbing regularity.

Her death galvanised my involvement, financially and emotionally.Raising three children in central London and seeing them benefit from the freedom of cycling and having it as part of my daily routine, I can see the benefits, from efficiency, health, and, thanks to LCC, safety. I now travel to and from my work, across Central London, mostly on a network of dedicated cycle lanes, which are absolutely crammed with usage.

A few years ago, I discussed with the team at LCC the idea of bringing together a community of people to stand behind LCC’s projects and people, providing a sounding board as well as consistent financial support. A series of Patron’s dinners fostered the community, and attendees have outdone themselves in joining me to support LCC.

The Patron Network has enabled LCC to fund a full time community campaigner, the terrific Clare Rogers. Claire has had an immediate impact rallying support for cycling in Kensington and Chelsea and Westminster, and is bringing together a network of Healthy Streets, schools groups, and many others, to make common cause with cyclists. The added benefit of hosting the dinners has been to meet a fascinating, diverse group of cycling Londoners. We all want the same thing; a healthy, efficient, safe, and widely supported transport system, for ourselves, our families and neighbours and the planet.

I remember talking with Ashok and Lucy years ago about how vital it was to get organised around fund-raising and development, and how they could assemble a big group of people who really cared, and together they could really make a difference to the city. They did, and it has. I’m looking forward to getting more of you involved in supporting LCC’s projects: we can make London like any other Northern European city, where cycling is the everyday norm, and everyone is invited to share in it.

If you want to become part of a network that will help initiate great change, then why not join the LCC Patron Network? To find out how contact Lucy Cooper.