A network of protected cycle tracks is the difference between cities where most people cycle, and those where most don’t.

Cycling From A to B

A network of physically-protected cycle tracks, on roads where there are lots of cars, or fast-moving cars, is the single most important thing we can do to get London cycling. Those of us who cycle today in London are a minority and we won’t get most people cycling without tracks that enable a far wider range of people to access shops and schools and amenities and to go directly from A to B.

It’s important to have a network of these routes that combine together. That’s the lesson from cities like Seville that have seen rapid growth in cycling. Most people will only cycle if they can come out of their front door, pootle through their quiet neighbourhood, turn onto the main road and cycle comfortably nearly all the way to their destination. People don’t want to have to wiggle or stop all the time. They also won’t cycle a route which gives up 4km before their destination.

LCC’s Love London, Go Dutch campaign around the Mayoral election in 2012 saw the first two major cycle track schemes delivered in London, despite fierce and organised opposition.
Since then, our campaigning has delivered and continues to deliver cycle tracks across London – from Waltham Forest’s Lea Bridge Road, to Wandsworth’s A24 and far beyond.

What type of cycle tracks are there?

Main road cycle tracks can be separated from traffic using a variety of methods and in a bewildering variety of designs, complete with loads of jargon (“with flow”, “bidirectional”, “semi-segregated” etc.). But the simple truth is you need some sort of regular barrier to stop cars just veering into cycle space, and enough space so if a kid on a bike wobbles, they don’t go into traffic.

A full, fairly continuous kerb (made of stone or rubber) put between cycle track and motor traffic. These generally give the highest feel of safety to users.

The cycle track is built at a higher level than the road, but next to it, with the pavement higher still (or, in some cases, with a very low triangle divider between pavement and track). Ideally, the kerb between track and pavement should be at a “forgiving” angle (circa 30 degrees), so that those cycling don’t skid if their wheel touches the kerb, and can even move onto the pavement if/when needed, but with enough height for visually-impaired cane users and others to understand the space.

Where cycle tracks are laid on both sides of a road, each with those cycling riding in the same direction as traffic flow on their side of the road. Bidirectional – Where the cycle tracks is laid out as two-way, on one side of the road. These use up less space, have less impact on the motor traffic capacity of the road, and work very well where those cycling are mostly riding in one direction at one time of day, the other at other times. But they do need to be carefully designed around side roads and big junctions to ensure those driving do not cause collisions with those cycling who are travelling against the flow of motor traffic.

These are design approaches for what to do for those cycling around bus stops. Simply expecting those cycling to ride through the bus “cage” (where buses stop), negotiating with buses, isn’t inclusive for most people. Bypasses work by routing the cycle track around the rear of the bus stop/shelter – so pedestrians cross the track to reach an “island” to wait for the bus. Following intensive research, TfL uses speed humps with zebra markings and tactile paving to enable pedestrians to more easily cross the track. Boarders are more controversial, but the data from TfL and European cities would indicate they also work well, despite some concerns. In this arrangement, the track continues between the road including the bus “cage”, and the bus stop where people wait. So when the bus arrives, people get on and off by crossing the track (usually with a small marked area between road and track).

What about bus lanes and bus gates?

Often in London, for now, bus lanes are the best cycling infrastructure you’ll find on a route. They’re wide, not generally encroached by most motor traffic (although many do allow taxis and motorbikes), and increasingly operate 24/7 with fewer parking bays. So often you’ll find bus lanes with nothing in them but loads of people cycling and the odd professionally-driven bus. This means they’re one of the best ways to cycle around London today. But would you let your child share a lane with loads of big buses? Most people wouldn’t. So while bus lanes can be useful for cycling in, they’re not going to help lots more people cycle. Bus “gates” are points in roads where only buses and cycles (and sometimes residents, taxis, motorbikes and/or deliveries) can go through. These are most often enforced by an “ANPR” numberplate camera and fines. Where buses are infrequent, these can be a very good way of delivering a cycle route without tracks (for instance as part of a “low traffic neighbourhood”).

Why are schemes going in using temporary materials now?

There are many reasons why sometimes temporary materials are used to deliver schemes. For trying stuff out to test it (and thus avoiding the need for expensive and time-consuming computer modelling); to keep costs low while budgets are tight; and where large developments or a major scheme means you need to adapt existing road layouts temporarily. We work closely with TfL’s temporary works teams to ensure where schemes are temporary and where roadworks are ongoing, the best and safest designs are used for those cycling, as well as disabled people, pedestrians, everyone.

What about routes through parks and on quiet streets?

Area-wide “low traffic neighbourhoods” can deliver great bits of the cycle network and knit in shorter journeys. But many of he older “greenway” and “Quietway” schemes don’t really work. If you can cycle straight through an area where car use is low, but there’s lots of people around on the street that’s good. But if you’re routed onto a dark towpath in winter, through an empty park or round the back of houses or an industrial estate, that can be a very scary barrier to cycling. Also parks and some old routes aren’t usable by a wider range of cycle than the traditional bicycle. Anti-motorbike barriers at park entrances and on canals often don’t work for trikes. And cobbles and gravel often isn’t a good surface for those using handcycles or a recumbent bikes. 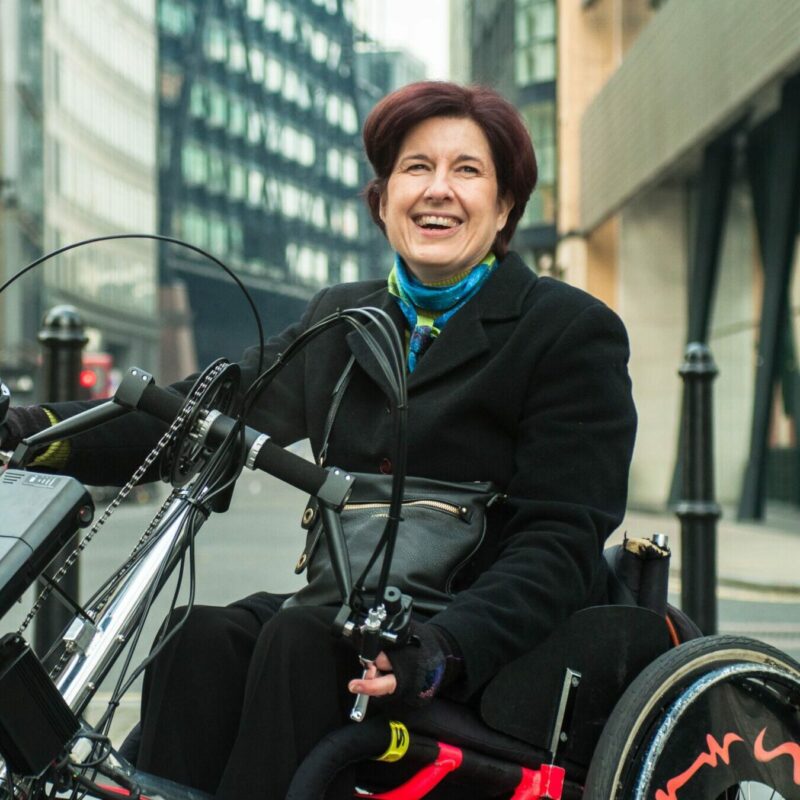