Cycling and Covid-19: what London needs to do now, and when the lockdown lifts 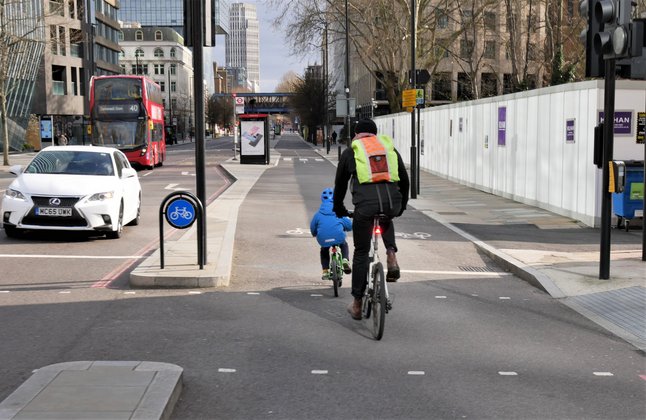 We are facing an unprecedented crisis. Right now, the number one priority is to stem the spread of Covid-19 in order to protect life. In order to do that, we need to enable key workers to get to and from work safely, and support everyone else to take their daily exercise in a socially distant way, without out putting additional pressure on the NHS. Improving conditions for cycling can help with both these goals. Longer term, we also need to start thinking about how these measures can support the city moving towards a low-carbon, low pollution future, following the steps we’ve laid out in our Climate Safe Streets report.

Why does Cycling matter right now?

We believe cycling can play an important part during the crisis: cycling is an ideal form of transport for many keyworkers and for essential journeys, because of its convenience, health benefits, and ease of social distancing. Cycling enables such journeys to happen over longer distances, such as for commuting to keyworker roles in London.

Short-term action during the crisis

We believe there is the opportunity to do more over the coming weeks, as the crisis plays out. London’s authorities should in the short to medium term:

After the crisis: business as usual, or shift to a low-carbon future?

We have just ten years to meet the Mayor’s declared target to make London zero carbon. A massive shift away from motor vehicles and towards cycling (and walking and public transport) is essential to decarbonise London’s transport sector. Do we want to return to pre-crisis, or possibly even higher, levels of motor traffic? Or create a new baseline for walking, cycling and traffic levels as we emerge from the crisis?

Right now, roads are quiet enough for many new people to cycle for essential journeys or exercise. Air pollution has dropped and we can hear birdsong on our streets. We are seeing more children and families cycling on our residential roads than ever before. We need the benefits of a city with far, far fewer cars, not because we are in lockdown, but because walking, cycling and public transport dominate our streets as part of a thriving society.

The sudden changes to our lives have made many more of us aware of the toxic air Londoners usually breathe when our roads are choked with motor traffic, and how unsafe most people feel to travel actively. And this should be a catalyst for action: we cannot allow a return to a car-sick city when the Covid-19 health crisis is over. We want streets to return to the sounds of people chatting, but not the sound of cars.

To achieve that, we have to treat climate change as a crisis. It is heartening to see the incredible response to a national crisis currently across councils and communities. But since most London authorities have declared a climate emergency, surely a similar urgency and scale of response is warranted once this pandemic is over?

We have long needed a coherent, cross-department, cross-borough approach on climate in London. And rather than treating electric cars as a silver bullet, we need decisive action to reduce and restrict all motor traffic to make active and sustainable travel the main modes of transport – see the recommendations in our Climate Safe Streets report.

As the crisis does recede, we will need to consider a number of issues as soon as possible: Is there a risk of motor traffic levels being higher than before, as Londoners continue to steer clear of public transport? Will those newly returned to cycling carry on as motor traffic levels rise? Will parents continue to ride with their children? Or, will more people work at home more often, and how will that impact transport? Will shopping patterns change, with more home deliveries?

Actions as the crisis ends

The UK government, the Mayor of London, TfL and borough councils should:

The Mayor specifically should instruct TfL to:

The Mayor, TfL and all London councils should:

* A US academic, Tabitha Combs, is currently compiling a list of different responses by different cities during the crisis. Find it here.