The much-awaited London trial of dockless e-scooter hire has begun, with 1000 scooters in five boroughs from three operators

The much-awaited trial of e-scooters for hire has begun, with the launch of about a thousand scooters in five boroughs, the City of London and Canary Wharf. Three firms, Dott, Lime and Tier, are operating the e-scooters for the duration of the 12-month trial.

LCC’s position on the e-scooter trial: Good or bad?

LCC welcomes the trial as an important step towards reducing dependency on private cars and so cutting carbon emissions and pollution. While e-scooters don’t offer the full benefits of active travel, they are small, electric-powered, and offer an alternative to car use for shorter trips.

In our landmark Climate Safe Streets report LCC concluded that: “if London can learn the lessons from other cities, then [e-scooters] should be a welcome addition to the city’s travel options.” LCC’s Micromobility and Active Travel in the UK report reviewed research from around the world and came to a similar conclusion, which was endorsed at the AGM. You can read the report in full, for free, including a summarised version.

It goes without saying that the concerns of impacts to disabled people concerning obstruction of footways for wheelchair users must be safeguarded against, using rigorous controls. This should be a change that reduces road danger and improves our air quality for everyone.

Where will you see them?

As both the LCC reports make clear, our position is that the arrival of e-scooters on London’s roads makes it even more important that protected cycle tracks across the capital are delivered more quickly. Surveys of (US) e-scooter users shows that they strongly prefer to be in cycle tracks rather than sharing space with cars and HGVs or pedestrians on pavements.

TfL says that safety will be a priority during the trial: LCC welcomes this commitment. E-scooters will not be allowed to travel on pavements and will have to be parked in designated zones enforced by the operators using ‘geofencing techniques. Their speeds are to be limited to 12.5 mph (the same limit as used in Germany) and all e-scooters must have front and rear lights switched on when in use. Boroughs will be able to request lower maximum speeds in particular areas.

Is this brand new to the UK?

No. Legally hire-able e-scooters have been available in select locations such as the Isle of Wight, which began in November 2020. 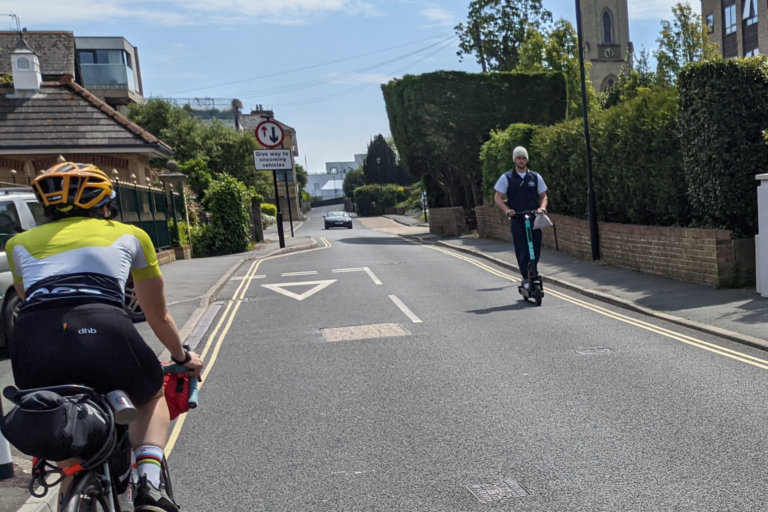 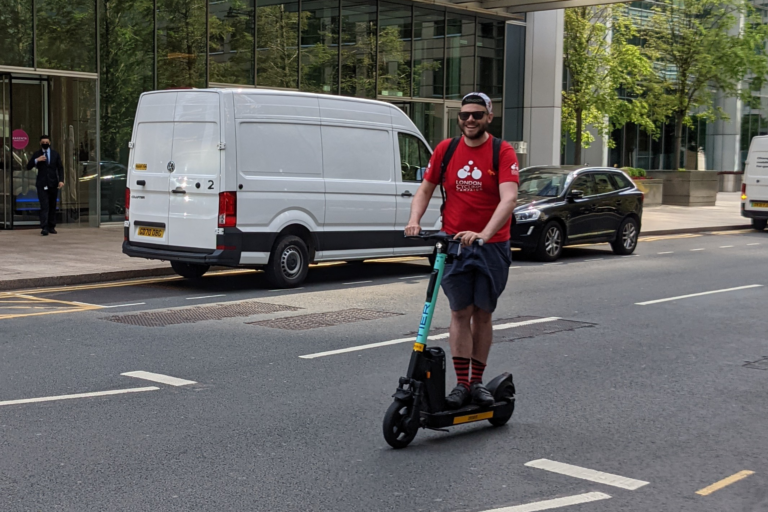 How big will the trial be and how will it work?

The number of e-scooters placed in each of the participating boroughs and areas during the trial is low compared to the distribution in Paris and other cities, at up to 150 each. Users will have to hold a provisional or full driving licence, in line with government rules, to use the scooters and undergo training on first use. Fees are set by the three operators.

It is disappointing that only five boroughs are participating in the initial scheme, though Lambeth and Southwark may join later. Until those boroughs join the scheme e-scooter riders will not, for example, be able to cross from the City of London to Kensington and Chelsea because neither Westminster nor Camden are participating.

The future of the trial

One of the potential opportunities for motor traffic reduction could be travel to stations by e-scooter in outer London – some indication of demand for such travel could come from Richmond and Ealing but there will not be similar input from north or east London.

Although the use of the shared e-scooters will be legal from the 7th of June this will not apply to privately-owned e-scooters which can still officially only be used on private land (despite widespread use across London already and some attempts by police to stop such use). The Bird e-scooters distributed in the QE Olympic Park can be used throughout the Park because it is classified as private land.

Speaking of parks – The Royal Parks have announced that hire scooters will not be permitted inside their premises due to their “stealth and speed.” 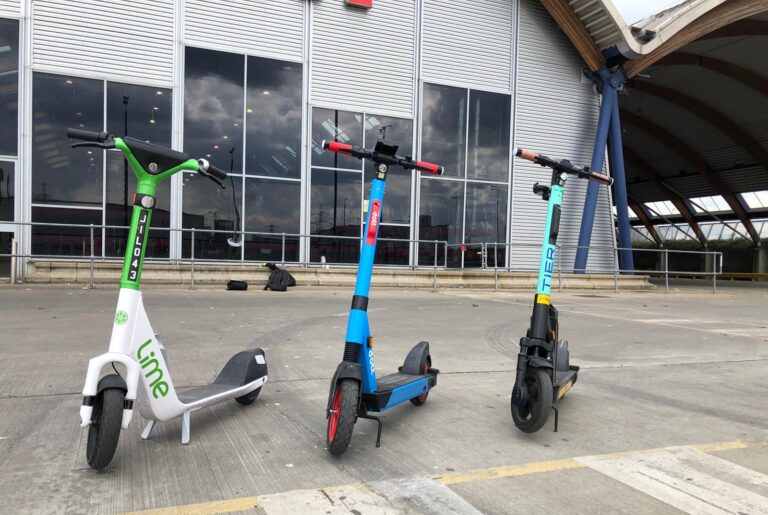 Boroughs & areas in trial at launch

In these boroughs, users will be able to ride through – for example from Canary Wharf to the City of London – but e-scooters won’t be distributed and cannot be parked inside the borough.