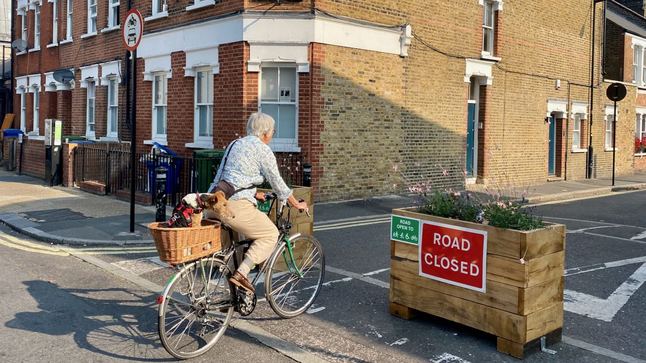 Right now London has both a lot of new cycle infrastructure (and quieter streets for cycling in Low Traffic Neighbourhoods) and a big growth in new cyclists trying to find their way around the post-COVID city with its restricted public transport.

Printed maps have been superseded for nearly everyone by digital navigation. But none of the current offerings can really be recommended. Google Maps is the first thing most people reach for, but it’s not really aware of cycle infrastructure and will sometimes send a rider onto horribly busy roads. The new TfL app TfLGO fails badly - while it does recommend cycling as an alternative to public transport it will only show a route from your current location, doesn't actually do navigation and uses Apple mapping which has even less awareness of cycle infrastructure than Google's. Attempts over the years to improve cycling in Google or Apple Maps have come to nothing - Silicon Valley tech co’s simply don't appear interested in dealing with the vast differences in cycle infrastructure design and approach globally.

However, OpenStreetMap already has a lot of new and Streetspace routes mapped and since it uses a dedicated community for updating, mapping errors are likely to be rapidly corrected and cycle-specific data added. But none of the apps that use OpenStreetMap as a base - Citymapper, Cyclestreets and Cycle.Travel amongst them - offer a great user experience and they all tend to prioritise complex back street rat run routes over Londons main road infrastructure. There's a real need to tweak these app routing algorithms so that new cyclists can benefit from the high quality infrastructure thats being built. In future theres also the potential to do more with OSM - we would love to see “accessibility graded” routing as a future capability using information about path surfaces, gradients or things like width restrictions that are a problem for some types of cycle or rider. This would be great future project for TfL to sponsor with a mix of internal development and crowdsourcing.

The same trip planned by Google, Cyclestreets, Cycle.Travel is shown below - none of these match the route that I would choose to ride.

Google just sends you straight up the A roads, ignoring any of the cycle infra along the way. Then it puts you over London Bridge (!) before finally putting you on CS3. 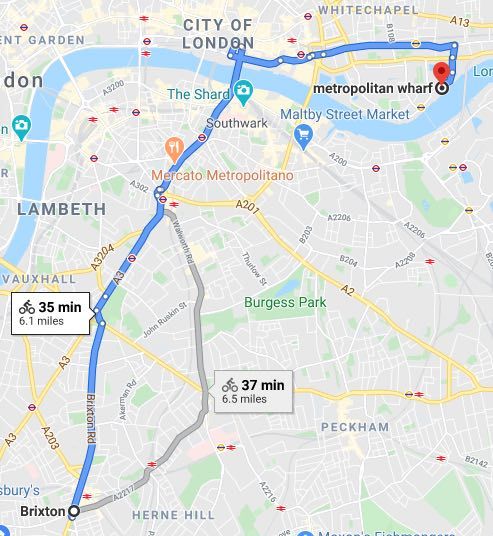 The green is quietest route, orange "balanced", red fastest. CycleStreets weights backstreet (LCN and Quietway) routes very highly but unless these run through low traffic neighbourhoods they're nearly always rat runs and take complex routes which are difficult to follow with lots of junctions. Of the three options the 'quietest' is probably the best - it gets you onto CS7 and uses a lot of CS3 - but real world experience is that most people would be more comfortable on the bus lanes of Brixton Road and CS7. 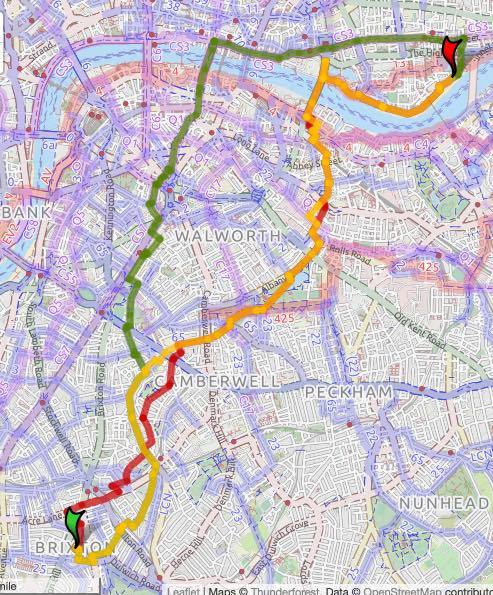 This probably does best of the three in this test and is closest to what I'd ride but it still has some weird back street diversions early on and could join CS7 earlier. 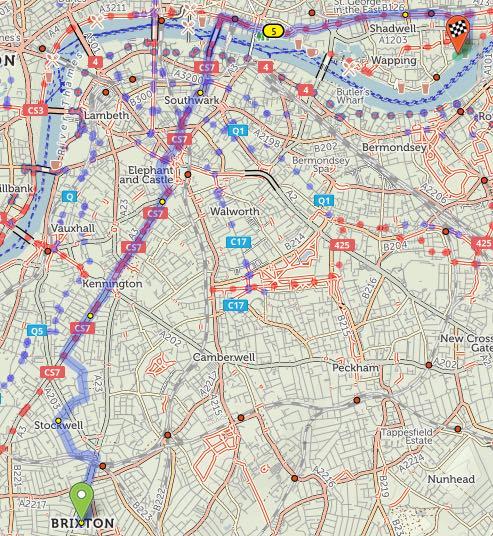 Digital mapping is only part of the solution to finding your way around on a bike. It makes sense to check a route online before you set off, but following routes on screen is clunky.

Routes away from main roads particularly can be difficult to follow and that goes for lots of trips that are enabled through the Low Traffic Neighbourhoods that are rolling out across London. Once you're actually riding your bike, good signage or wayfinding makes it much more convenient than trying to follow a route with a phone strapped to your bars (or even worse, continually stopping to get it out of your pocket). We look at this in a more depth in the second part of this post