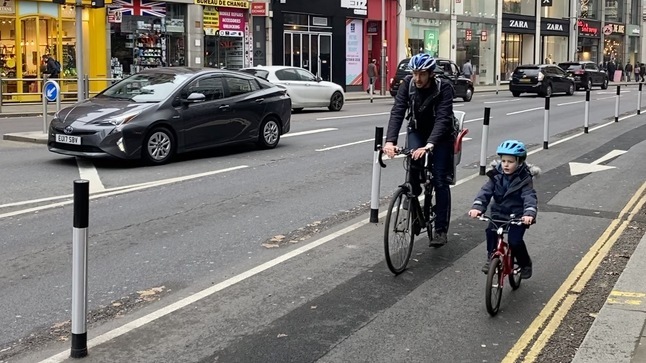 Kensington & Chelsea council officers have published a report ahead of their 17 March meeting to ‘revisit’ their removal of the protected cycle tracks from High Street Kensington. It sets out four options: 1) reinstate the cycle tracks as they were; 2) partially reinstate them, without creating a continuous route; 3) do not reinstate them but start ‘considering’ an alternative scheme for the long term in the summer; and 4) do nothing.

We are deeply concerned that anything less than reinstalling the cycle tracks is being considered a valid option for this dangerous road, while people using it continue to risk serious injury and worse. We're also concerned that the report’s tone comes across as biased against the cycle tracks, giving more weight to objections. It downplays the impressive coalition of more than 70 supporter organisations pulled together by Better Streets for Kensington & Chelsea by not naming 48 of them, including the Imperial NHS Trust, the Royal College of Music and RBKC Youth Council. It also wrongly lists as objectors organisations like the Kensington Society who had declared themselves neutral.

Despite this, the report’s contents and appendices – including strong data from Transport for London – still makes the case that for the health and safety of 1000s of Londoners, there is absolutely no lawful reason not to reinstate this crucial protected cycle route. All eyes are now on the council to make the right decision on 17 March.

In a press release dated 8th January, Kensington and Chelsea council leader Elizabeth Campbell says she has has asked the council to look again at the decision to remove temporary cycle lanes on Kensington High St. She says she has asked officers to provide an up-to-date report on the tracks.

LCC thanks all its supporters and every one else to wrote to Kensington Council about the very poor decision  to remove the temporary tracks which provided an essential link between the key cycle routes in Hyde Park (from the Tower of London, Parliament and Barking)  to the temporary routes in Hammersmith. We trust that the evidence cited below will be considered by the council and its officers.

Update 11 January 2021: However, following the press release, a new letter was uploaded to the council site apparently in response to BetterStreets4KC's "pre-action protocol letter", which states the council is reconsidering in order to ensure "any claim for judicial review is now rendered academic". The council will not carry out further consultation, nor does it recognise any duty to do so (it has yet to carry out any formal public consultation on the scheme going in or coming out). So this could well all be to bolster the council's legal case against a potential legal action on their decision making process, or lack thereof.

Indeed, given the apparent extreme urgency and haste to remove the track in the first place, the ongoing lockdown and pandemic, and the clear safety case for the scheme, plus the lack of supposed benefits the removal would bring, the council's inability to reassess its informal, unminuted decision to remove the tracks without months of reports and deliberation now seems increasingly suspect too.

The case made by the Royal Borough of Kensington & Chelsea against its own cycle tracks on Kensington High Street looks more and more flimsy, less and less sane, with every day that passes.

The latest news comes from traffic counts taken from traffic-cams on the road using Google machine learning algorithms by the #BikeIsBest national campaign, and a series of Freedom of Information requests by Institute of Cancer Research scientist Steve Pettitt. ICR has two sites relatively near to Kensington High Street.

The story so far

RBKC council declared its intention to rip out cycle tracks it had used TfL funding to install on Kensington High Street, despite copious evidence the tracks were working well and using a very flimsy basis to do so in late November, which triggered widespread condemnation of the borough, potential legal action and XR protests. Almost immediately after the tracks came out, RBKC’s decision-making process and reasoning for removal came under fire.

A group of local activists (including some local LCC members), Better Streets for K&C, have been putting time and energy into picking apart the flimsy case made by the council to rip out the cycle tracks. Following legal advice, they have written a "pre-action protocol letter" to launch a Judicial Review of the decision with help from the Environmental Law Foundation.

What do the traffic counts show us?

According to The Guardian’s coverage…

What do the new FOIs reveal?

According to Steve Pettit and Forbes coverage of the FOIs…