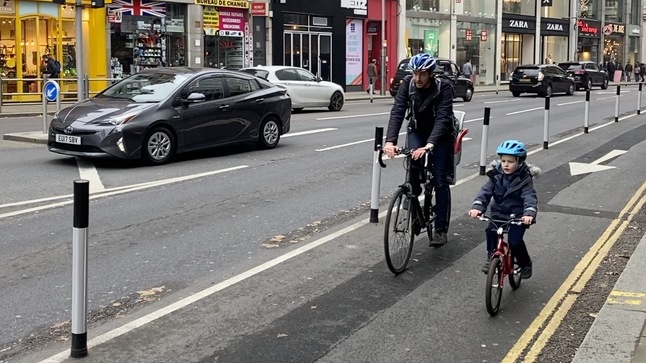 The Royal Borough of Kensington & Chelsea removed its Kensington High Street cycle track scheme last weekend, despite strong opposition to the move from all quarters, and using what is an increasingly flimsy basis for its decision.

We believe the council has taken a deeply retrogressive step in removing the cycle track. We urge it to reconsider the full range of evidence and case for the scheme, and reinstate it rapidly. We also believe the council, in the manner in which it has acted not just on this scheme, but other recent schemes, such as TfL’s Holland Park Avenue proposals, is actively and deliberately undermining progress on the Mayor of London’s transport strategy, its own climate emergency declaration and acting directly against its duties to protect its own residents as well as Londoners in general.

As such, we urge the Mayor and TfL, as well as government, to take all actions available to ensure the tracks are reinstated and progress is made in the borough, with or without support from councillors.

We also urge London’s business community, politicians and residents to actively support schemes such as Kensington High Street that provided protected, comfortable cycling routes for thousands of new people cycling, including children. It’s vital we don’t allow our fear of change to cloud our assessment of evidence and impact on the need to get more people swapping cars for bikes to help deal with our climate crisis and London’s issues with pollution, congestion, road danger, inactivity and pollution.

The case the council has made to remove the cycle track appears to rest on the following reasons. With each reason, it is also clear that the council evidence basis for removal is beyond weak. Indeed, it is clear the council has specifically sought out evidence to back its decision, rather than used evidence to inform it:

For more background on the tracks and the lead-up to their removal, see our previous blog here.