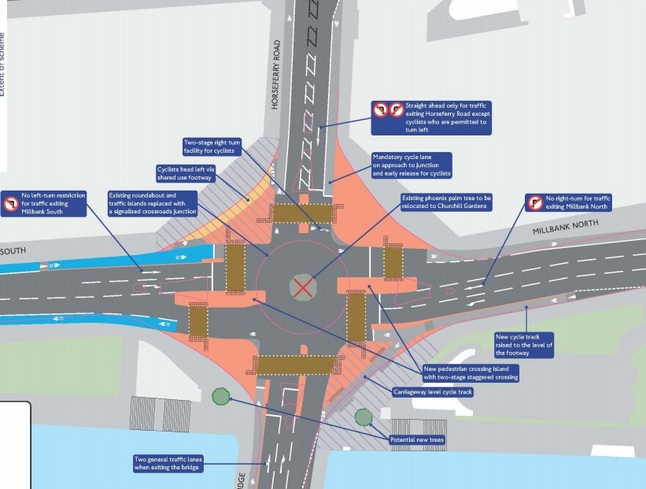 Upgrades to the horrific, dangerous roundabouts at both ends of Lambeth Bridge have finally moved forward today. The north one has previously been named the most dangerous roundabout for cycling in the UK. And the announcement comes after years of campaigning by LCC and its local groups.

TfL has announced revised plans (see image above) and a construction timetable “subject to approvals and agreements” which strongly implies those holding the scheme back for so long have finally agreed a way forward. However, construction isn’t even set to begin until 2022 – meaning it’ll be over 10 years since we highlighted the junction in our Love London Go Dutch campaign until it’s complete. These changes are already too late for Moira Gemmill, her friends and family. Hopefully they won’t be too late for anyone else.

The scheme proposals were controversial at the time of consultation, with results of the consultation very much split down the middle (the northern roundabout got the worst result, 41% opposed vs 37% support). Major concerns raised were of banned turns leading to traffic displacement into more residential Westminster streets, increased congestion and pollution, and even that despite the horrific collision record of these junctions changes were “not needed”. Westminster Councillors campaigned against the proposals at the time – including fighting to retain the palm tree at the middle of the northern roundabout.

Church Commissioners for England “strongly objected to the proposals for Lambeth Bridge south” and were “concerned proposals might adversely impact to day-to-day operations at Lambeth Palace for both residents and visitors”. The Commissioners, however, barely mentioned the current safety record of the roundabout, and only mentioned safety, apparently, in opposing a keep clear box.

Westminster Council also opposed the scheme in its entirety at the time. Improved safety for cyclists “needed to be balanced with their duty of network management and transport objectives of lower emissions, quicker journey times and reduced congestion”.

Possibly strangest of all was the Millbank complex owners Motcomb Estates who said (according to TfL) their tower was “some distance from underground and national rail links which meant that walking to the site was unattractive, and visitors often arrived by taxi.” It’s 0.6 miles – about a ten minute walk.

Most openly anti-cycling comments came from the board of Westminster Gardens who “considered proposals to be a huge waste of public money and suggested that the project should be cancelled. They did not find the current, recently redesigned, Lambeth Bridge northern roundabout dangerous… Urged TfL to consider the registration of all bicycles as this had been demonstrated in other countries to have significantly reduced the loss of cyclists’ lives.”

As well as powerful voices set against the scheme, security forces have been pushing back improvements, we understand, to enable designs to move forward that include “hostile vehicle mitigation” measures to stop motor vehicle terrorist attacks. However, we remain convinced that none of these issues should have caused the delays the project has already seen, risking more lives of those walking and cycling, nor does the current two year delay before construction make much sense either. We’ll be pushing for clarification on this from TfL and the Mayor’s office as a matter of urgency.

Finally, the changes to the scheme on Lambeth Bridge North (see image above) have weakened cycling and walking provision too. Only one dedicated left turn lane to allow cyclists to avoid waiting at lights remains (two have gone and one more is now shared pavement). On two arms there are now staggered crossings for pedestrians. The bus bypass onto the bridge has also gone, which looks like it removes a potential hook risk that was criticised in the original scheme, but does leave some potential for longer delays for those cycling or potentially even less separation from turning traffic at the lights - we're trying to confirm which currently.