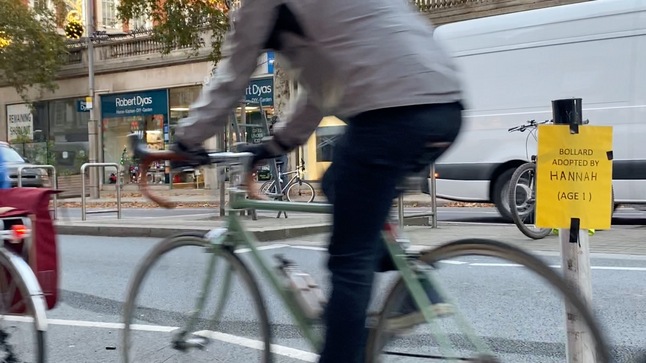 London Cycling Campaign condemns the decision made today by the Royal Borough of Kensington & Chelsea (RBKC) to not reinstate the protected cycle tracks on High Street Kensington, and calls on the Mayor, Sadiq Khan, and Secretary of State for Transport, Grant Shapps, to take immediate action.

The council leadership team chose instead to 'commission research' into post-Covid transport patterns, starting in the summer, an options described by local campaigners Better Streets for Kensington & Chelsea as 'kicking the can down the longest road'.

LCC Healthy Streets Campaigner Clare Rogers said, “The cycle tracks, even though they were only in for a few weeks, proved a crucial safety measure for thousands of people daily, both on a strategic east-west route for London and for local trips such as families riding to school, on what was, and now is again, the most dangerous road in the borough for cycling. Kensington and Chelsea is clearly incapable of behaving as a responsible local authority for this highway, or following its own policies on road safety and the climate emergency. The Secretary of State for Transport and Mayor of London must address boroughs like this one, that act against or ignore government, regional and their own policies.”

The Mayor and Secretary of State must act for several reasons in LCC’s view:

Today’s decision is sadly not a surprise. The officers’ report released last week was in our view heavily biased against the scheme and had serious omissions and errors.

The original decision to remove the cycle tracks – taken without a formal meeting or minutes – was considered unlawful on multiple counts by the Environmental Law Foundation, acting for Better Streets for Kensington & Chelsea, a group of local volunteers who have been working closely with LCC. This council can now expect to face legal action from a number of organisations including Better Streets.