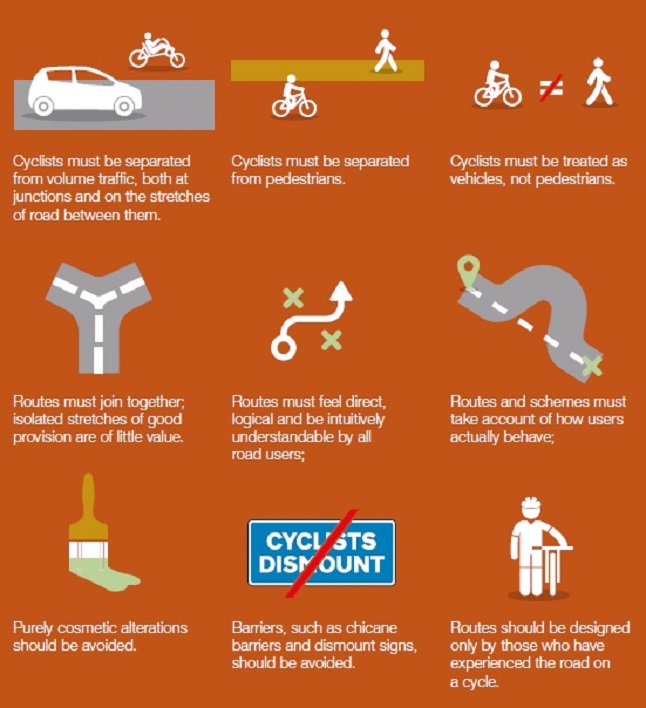 In 2012 LCC’s Love London, Go Dutch campaign persuaded London Mayor, Boris Johnson to do a volte face and ditch the blue paint in favour of the Dutch approach to cycling – high quality protected cycle lanes, low traffic neighbourhoods, and making cars rather than bikes guests on urban roads. Our campaign saw the installation of new, Dutch-style long distance cycle tracks and three major Mini-Holland schemes. The man he employed to make it all happen back then, Andrew Gilligan, is now doing the same for his boss at the heart of Government, judging by the announcements from the Prime Minister and DfT this morning.

Mr Gilligan has done something unheard of at the DfT: he has broken through the bureaucratic inertia, half-hearted political leadership, endless cycles of empty consultations and toothless strategies that previously typified the DfT’s approach to cycling, announcing a programme to create “thousands of miles” of properly protected cycle lanes across England.

Finally, we have political will at the top of Government to address society’s chronic over-dependence on motor cars – and all the pollution, carbon emissions, congestion, blighted urban spaces and inactivity-related health problems (including susceptibility to Covid-19) that flow from it. Or do we?

LCC believes there are five key tests that the Government must meet if this is really to be the start of a cycling revolution. But before we get to that, let’s have a quick tour of what Mr Gilligan announced:

This is potentially ground-breaking stuff. Boris, Mr Gilligan and Grant Shapps deserve a lot of credit for achieving some cut through. LCC will play our part in helping to realise the above. But let’s also remember what we have already seen in London.

LCC persuaded the current Mayor, Sadiq Khan, to triple the mileage of protected cycle lanes in London over the last four years and make a Liveable Neighbourhood scheme available to every borough. In delivering this, Sadiq Khan put £770 million for cycling into TfL’s budget, as part of a £2.3 billion Healthy Streets programme. That’s just for London. Khan was aiming to spend £17 per resident of London per year on cycling. That’s approaching Dutch levels of spending. While the government has announced a six-fold increase in national spending, that’s only about £9 per head – half of what London and the Dutch are doing.

Boris says his plan “aims to kick off the most radical change to our cities since the arrival of mass motoring.” So he realises that this can only be the start of the start; and he surely also recognises that sustained, long term political will and financial investment will be the critical determinant of whether this wholly welcome transformation will occur.

Remember, the Dutch have consistently spent about £25 per person per year on cycling infrastructure for decades. That translates to over a billion pounds a year in the UK, not just for one parliament, but for many, many years to come.

So is this this really the start of a cycling revolution? Here are five tests that LCC calls on the Government to meet: