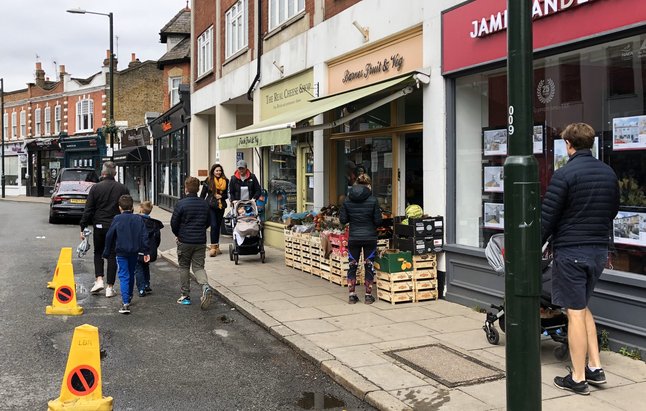 Update 27 April: Of course, the moment we published this blog, several boroughs announced plans to act. Big socially-distanced cheers to Lambeth for confirming emergency action on wider pavements, cycle tracks and low traffic neighbourhoods, Lewisham for emergency action on low traffic neighbourhoods, and Richmond for building an "post-Covid transport action plan" to "make sure that active travel... remain and improve as options within our borough". If we've missed your borough from the list, let us know and we'll update again.

We’ve asked our borough groups to send us the highest priority routes for temporary protected space for cycling during lockdown and as it eases. We’re looking for those routes with most potential to be rapidly deployed – main roads with multiple lanes, now spare capacity – and which parallel key bus and tube routes. These can be both TfL-controlled “TLRN” routes and borough controlled main roads too. Or if you’ve got an idea for a Quietway-style route that’s high capacity, needs minimal intervention, give us that too.

Those interested in walking, cycling and sustainable transport have watched with envy as the rest of the world, beyond the UK, has cracked on with delivering emergency cycle lanes and widened pavements to ensure people walking and cycling can queue outside shops and get around safely during the global crisis, while we’ve done nothing. Cities such as Bogota, New York and Berlin have slammed in miles of cycle track using temporary measures, and Milan has come out with a clear plan for what happens when lockdown measures start being eased off. London? Not so much… so far.

We’ve also watched with concern as a majority of British people surveyed who hold driving licences, but don’t currently own a car, are now thinking of buying one; while in Wuhan, their lockdown easing has seen people shunning public transport in favour of cars. In other words, it should now be clear to everyone that lots of people see the car as the answer to avoiding public transport currently – and that’s set to continue long after the current lockdown eases.

It’s also obvious that lockdown easing won’t mean a return to “normal” – social distancing measures of some sort are likely to remain for a long time, including a skeleton public transport service, with controls for crowding and therefore far lower capacities per bus or train. Another reason why public transport use is not set to return to normal for years, possibly.

In London, that could easily result in a catastrophic rise in car use, particularly in outer London. And that in turn would be terrible for walking and cycling – active travel rates are entirely based around safe-feeling routes and lower motor traffic volumes. Loads of the keyworkers currently cycling to work won’t continue if/when motor traffic levels rise back to where they were, much less if they end up even worse than before.

So why has London and the UK seen so little temporary action on our roads? Hammersmith & Fulham started widening pavements on 22ndApril on King Street and Uxbridge Road; Brighton has closed a couple of roads during the day and in Barnes, a local community association of shops and residents has taken the initiative and coned off parking without seeking approval. There's now talk from other boroughs in London (see update, above) and beyond, that more is coming. (Here's Leeds doing a cycle track for keyworkers.) But so far, very few councils have acted to help walking, cycling and socially distancing in the UK.

Partly this is because in the UK doing almost anything involving restricting car parking and access for motor vehicles requires formal consultation. The press in the last few days has trumpeted a slashing of red tape on this issue but just isn’t the case… right now. The Department for Transport has simply eased some of the consultation notices required as loads of local papers aren’t printing. But the consultations still have to happen.

Cycling UK, and transport experts including Adrian Lord, Mark Strong and @RantyHighwayman have all been working through the legislation. Strong helped get in the timed filters for a three week emergency period in Brighton by arguing there was a clear safety risk in not doing so to the public – from lots of people walking in the street to socially distance being passed far too often, too close and too fast by drivers.

The Cycling UK guidance for officers shows that coning off sections of road, putting in temporary barriers is possible without formal consultation if the council still do their due diligence and there’s a clear and pressing public safety issue. Mandatory cycle lanes can also go in without changes to parking without consultation. But what about filtering low traffic neighbourhoods, as Hackney suggested it would do on a temporary basis? Although there is potential for the DfT to change this, at present this would need an Experimental Traffic Order (ETO) and trial scheme. But the good news is several councils are now actively moving these forward.

In summary: the good news is there is little stopping your council coning off parts of the highway where there’s an evidenced public safety issue; or using ETOs to filter neighbourhoods as a trial; the bad news is that councils, themselves hit by Covid-19 cases and the need to socially distance, stretched thin trying to keep us all alive and running essential services, and facing a very uncertain funding future, may not have resources, capacity, or willpower to do much of this at the moment.

The Mayor must act

At a more regional level, it’s clear that after weeks of just trying to keep London’s transport system moving, and keeping its workers alive, sharp minds at TfL and City Hall are turning to what happens next. Not only does TfL face the prospect of a city with running tubes and buses, but few riders – and the budget implications that come with that, potentially for years. It also faces rising car use discouraging people from riding their bikes.

Right now, we’re asking the Mayor and his team to do four things with urgency (as well as a load of other stuff too):

You can read our full thoughts on this here https://lcc.org.uk/articles/cycling-and-the-covid-19-crisis

This is a straight fight right now between cycling and car use. Most bus and tube journeys are too far to be walked. So if we don’t get the cycling right, we’ll see the cars come back, and probably to higher volumes than we’ve seen in decades.

We miss our friends, we miss eating out, we miss a thriving, happy city. But we don’t miss people driving 200m to drop kids at school, or 1km to the shops. We don’t miss the haze of pollution that covered the city, resulting in near 10,000 premature deaths each year, nor do we miss the catastrophic, climate changing, levels of emissions.

We like hearing bird song, and having quiet residential streets to cycle or walk with children on – and many Londoners are saying they want to keep that. There’s #NoGoingBack - particularly given how clear it is that it was the cars all along causing all that pollution - not cycle tracks(!). And particularly too given respiratory viruses like Covid-19 are more easily spread and more lethal in cities where pollution levels are off the chart – as London was.

Never again should our city choose car driving convenience over our lives, our climate. Right now that means picking out cycle routes that can replace car journeys and public transport. As motor traffic volumes rise, we’ll also need to focus on residential streets and low traffic neighbourhoods. But today, it’s about safe walking social distancing pavement widths and high capacity cycle routes to get people to work without using a car.