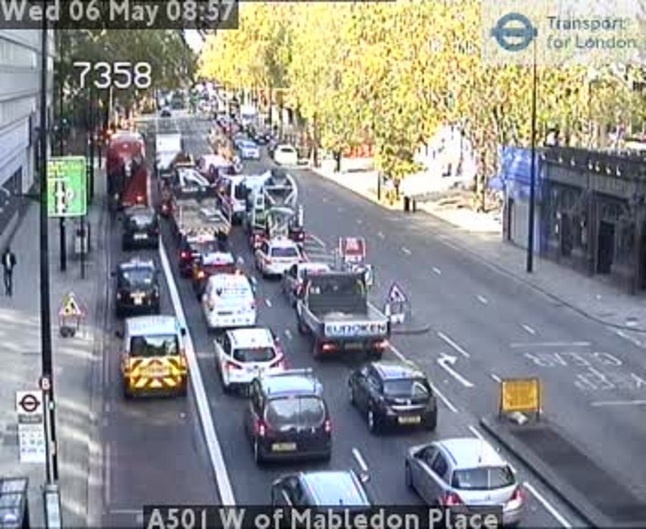 The Mayor Sadiq Khan, and his Walking & Cycling Commissioner, Will Norman, have announced a major new “Streetspace Plan” to implement emergency measures during and as lockdown eases. The plan aims to ensure motor traffic levels do not return to where they were before the crisis, or higher, while also enabling millions of journeys to be walked and cycled across the city.

Details on the plan thus far are light, but include:

Early modelling by TfL, Norman says, shows that by the end of the crisis, the measures proposed could result in a tenfold increase in cycling, and five-fold in walking. What does that look like, how will we get there and what does it mean for London? In this rapidly-evolving situation, here’s a few of our initial thoughts:

UPDATE: Quotes from the press release

The emergency measures included in our major strategic London Streetspace programme will help those who have to travel to work by fast-tracking the transformation of streets across our city. Many Londoners have rediscovered the joys of walking and cycling during lockdown and, by quickly and cheaply widening pavements, creating temporary cycle lanes and closing roads to through traffic we will enable millions more people to change the way they get around our city. I urge the Government and boroughs to work with us to enable Londoners to switch to cleaner, more sustainable forms of transport - and reduce the pressure on other parts of our transport network – once the lockdown is eased.”

As the lockdown is eased, London will need to get moving again, but in a manner that maintains social distancing. The only way to do this effectively - whilst also avoiding a calamitous return to toxic air, high carbon emissions and traffic-choked streets - is to make it easier and safer for millions of people to walk and cycle. Large numbers of Londoners have already taken to cycling for essential travel and exercise during lockdown; the demand is there, and the Mayor’s new Streetspace plan can and should be the start of a permanent transition to a greener, healthier and more resilient city.”

Our calls for emergency measures

LCC has of course been pushing for emergency measures in response to this crisis for some time. We wrote a brief list for the Mayor on 24 April and a broader list on 9 April. Summarised, these are:

As well as calling for emergency action, we’ve also tracked the response from individual London boroughs as they emerge. Hackney, Lambeth and Hammersmith & Fulham pre-empted TfL and City Hall in taking emergency action on their roads. As of this weekend, other boroughs are joining them in coning off sections of their roads to enable wider pavements and social distancing, and a second wave of plans have been announced to enable safer cycle routes. Many of our borough groups are pushing their councils for further action and suggesting locations where action is a priority. And at last, TfL and City Hall are taking action too.

TfL and City Hall spent the first few weeks of the Covid-19 crisis trying to keep public transport running, then trying to deal with staff safety. Meanwhile, Paris, New York and a growing list of global cities joined Bogota in taking emergency action on enabling cycling and walking, while London did not. On Friday, the Mayor and Commissioner finally announced similar action for London – following it over the weekend by widening pavements at locations across TfL’s network using temporary barriers. This is the first stage in the Streetspace Plan.

Norman has called the emergency “Streetspace Plan” “radical” and “unparalleled in a city London’s size”, so theoretically topping Paris’ 650km of emergency cycle track plans and proposals to close major roads such as Rue de Rivoli to motor traffic.

The plan also pledges TfL will work with boroughs on town centres, shopping streets and “low traffic neighbourhoods”. This will be key. TfL’s congestion charge and ULEZ are currently suspended, and we understand that it could take up to three months to reinstate these from any point when the Mayor decides to do so. With motor traffic rates rising daily at the moment, any chance of enabling more people to cycle and walk now hangs in the balance.

Why action is needed

We know that people cycle in mass levels (levels we’re currently seeing sporadically in London), when cycling is kept separate from large numbers of fast moving motor vehicles, and/or on roads that are truly quiet, in a coherent, comprehensive network of direct routes. All the nurses, keyworkers and parents and children cycling on side roads and main roads won’t keep doing so if and when the motor traffic returns. And while TfL can take rapid action on main roads, if all the ratruns are still available, London will rapidly become a no-go city for most to cycle in. So boroughs acting on their roads too will be imperative.

Lambeth. Hackney and Hammersmith & Fulham are already moving, Richmond, Waltham Forest, Camden and others are close behind. Whereas, what have Westminster, Kensington & Chelsea, Havering etc. said? Not much so far, sadly. If and when the cars do all come back, it will rapidly become clear which boroughs prize motor traffic movements over their residents’ health and safety – and it won’t be just about cycling. The most obvious issue will be pollution.

The need for rapid action is because, as Norman says in his BikeBiz article: “With London’s public transport capacity potentially running at a fifth of pre-crisis levels, up to eight million journeys a day will need to be made by other means.” If buses and trains and tubes can’t get people returning to work, shops, restaurants there as London’s lockdown eases, what will? Cars?

The spread and lethality of Covid-19, it looks increasingly likely, is exacerbated by pollution levels. And of course, the current crisis will be followed by a far larger one, in the form of the climate emergency. Even returning to current motor traffic levels would be a disaster on emissions, pollution, but also inactivity, and road danger. But we could easily face motor traffic levels far higher than we’ve seen in decades.

The Streetspace plan and borough action will be absolutely vital in ensuring we don’t face a London not just economically weakened by lockdown, but at gridlock, with worse air quality, road danger and climate-changing emissions.