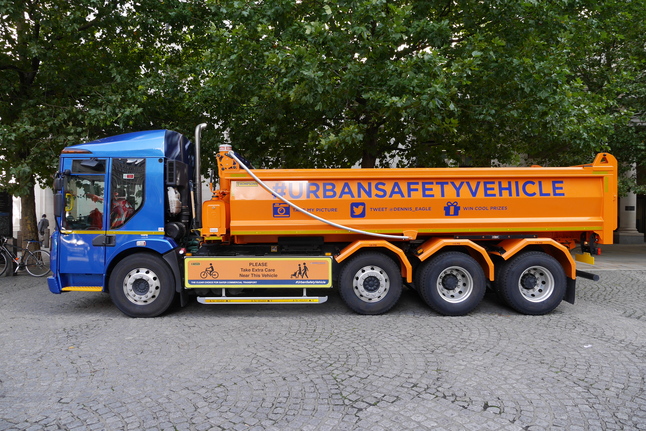 As all loyal LCC members know our organisation has led the way on campaigning for safer lorries for more than a decade and we’ve been successful. LCC’s campaigning won a commitment from Mayor Sadiq Khan to take action over this mayoralty to make Direct Vision lorries (vehicles without blind spots and the safest type on the market) – "the norm on London’s roads”.

Now under new Department for Transport (DfT) proposals, contained in the Gear Change document, London successes such as the Safer Lorry Scheme (that preceded Direct Vision)  and the Direct Vision Standard could now benefit the whole of Great Britain.

"We will review the latest vision standards introduced in London in 2015 and consider whether any elements can be extended to the whole of the GB."

London already has a Safer Lorry Scheme which requires all HGVs entering London to have six safety mirrors and  sideguards. As of March 2021 the scheme will also require vehicles to meet a one star Direct Vision Standard (DVS), which minimises the blind spots in HGVs, or include specified mitigation measures.  This standard will be raised again in 2024 to three stars (the standard runs from zero to five stars) .

If the Direct Vision standard and other DfT proposals, such as sideguard maintenance, become Britain-wide they will surely encourage fleet operators to upgrade vehicles and reduce road danger across the country.

In London we have already seen virtually all refuse collection vehicles changed to a five-star DV type. Most of the larger fleet operators in the capital also subscribe to the FORS (Fleet Operators Recognition Scheme) or CLOCS (Construction Logistics and Community Safety) schemes which ensure that all drivers are trained in minimising danger to vulnerable road users.

Our campaigning efforts (along with those of Boris Johnson and as Mayor and later his successor, Sadiq Khan), also successfully persuaded the European Union to adopt new, safer direct vision standards for HGV manufacturers.

What’s  also promising about the new DfT proposals on improved cycling conditions is that they aim to pilot, in one or two cities,  “compulsory freight consolidation schemes, based on experience from the Continent, which seek to ensure that all deliveries (except perishables and items which require specialist carriers) are made to consolidation centres on the edge of the city centre, or the edge of the city, then taken to their final destinations in a far smaller number of vehicles.”

The concept of consolidation centres was proposed in LCC’s Climate Safe Streets report and makes every bit of sense as we try to reduce both congestion and pollution in our cities. To quote the DfT document: “ Parts of some cities are served by as many as 50 waste management and delivery companies, with multiple pickups from businesses on the same street and large numbers of delivery vehicles carrying out duplicating trips”

The City of London has already required some new large developments to include consolidation centres in order to reduce vehicle movements. And there is little doubt that we will have to have many more load consolidation centres to meet our decarbonisation targets. The principle must be built-in to all large planning applications so that the land required for consolidations centres is safeguarded at an early stage (just as it has been for HS2 and other programmes) .

The DfT has also recognised the need for emission free deliveries which can often be made by e-cargo-bike:

As our Climate Safe Streets reports points out the advent of e-cargo bikes means even some construction goods can be carried by cycle and that cargo-bikes can play a major role in reducing the ever growing number of van deliveries that the on-line shopping economy has generated.

What’s’ missing from the DfT document

While all the proposals in Gear Change are very welcome there are other progressive developments in London which could be rolled out elsewhere.

The CLOCS standard for construction firms is required in some London boroughs (including Camden, City of London, Islington, TfL )  but has yet  to become a nationwide requirement or even a standard on all government funded projects. The same is true of the FORS standard which has been adopted as a requirement by virtually all London boroughs.

Driver training, as contained in the  government –approved Safer Urban Driving (SUD) module,  is widely taught in London but is yet to become a required part of every driver's Certificate of Professional Competence training – thus  a driver could do a first aid course repeatedly instead of doing SUD as one of his or her annual training sessions.

What you can do

Whether you are in London or beyond you can lobby your council to sign up to FORS and require all major developments to be CLOCS members. You can also ask your council to procure only the safest lorries . And finally , if you are a Londoner but not yet a member please join LCC - we need your voice to help reduce road danger and make London a world class cycling city.