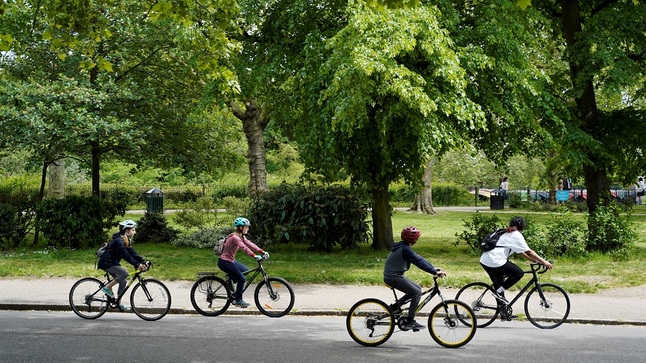 Following on from our Sustainable Secondary School Run webinar, Lucy Marstrand-Taussig, from Project Centre, expands on how we stop the school run falling between the data and planning gaps.

When London schools re-open in September social distancing will still be in place. Pupils are being asked by TfL to “walk and cycle wherever possible to create extra space on buses and other public transport for those who have no alternative” .

Public transport capacity is likely to remain at 10-30%. About 330,000 trips to secondary schools in London will need to happen by other means on the road network because of the loss in bus, train and tram capacity. (Nationally, about 1m secondary school children who would normally get the bus to school will need an alternative.)

Given the distances involved in the public transport trips to secondary schools, and the need to find an alternative, the most likely option is cycling, rather than walking. Three quarters of children live within a 15-minute cycle ride of a secondary school. Hands up surveys in schools tell us most kids want to cycle – yet only 2% of children cycle to school nationally. To make cycling viable there is going to have to be a radically different infrastructure in place with a specific focus on secondary school children and their journeys.

So, what are the TfL plans for safe travel by cycle to schools in September? There are three main types of intervention being considered under TfL’s Streetspace plans :

The Temporary Strategic Cycling Analysis for Streetspace identifies ‘top priority’ routes. These are primarily arterial routes heading into, or out of, the centre of London. They broadly align with commuting desire lines and potential identified by the Department for Propensity to Cycle Tool and illustrated in Figure 1.

When you look at the Propensity to Cycle Tool what comes up for travel to school is very different to travel to work. Cycle to work potential increases as you move into central London. Potential for school travel, shown in Figure 2, is much more dispersed and consistent across Greater London. Cycle to school potential can be just as high in the outer boroughs as it is in the centre of London.

Figure 1: Cycling potential for trips to work in London under the 'Go Dutch' scenario. Source: Propensity to Cycle Tool

Figure 2 : Cycling potential for trips to school in London under the 'Go Dutch' scenario. Source: Propensity to Cycle Tool

TfL urges authorities to “Consider the location of school streets and LTNs. In some cases, an LTN may substantially reduce traffic levels outside multiple schools.” The issue here is that LTNs are likely to have geographical gaps between them. How do children negotiate the gaps between the LTNs?

TfL is supporting boroughs with the implementation of School Streets. “Where schools are present, School Streets should form an integral part of temporary LTNs.” “School streets provide a solution for additional space outside primary and secondary schools” . They may provide space immediately outside schools – and that will help primary school children of whom 90% live within a 15-minute walk of their school. But secondary schools serve a much wider catchment area. School Streets do not address how children safely access their school if, as in the case of secondary schools, they are travelling from further afield by cycle.

Falling between the gaps

Other factors exacerbate the lack of secondary school cycle infrastructure.

The historic focus on commuter cycling, particularly in Central London, though welcome, has further skewed provision - widening the disparity between the quality and coherence of cycle network provision for adult commuters in Inner London and children trying to get to school in Outer London.

Many children are escorted to school because the road environment is so hostile it is not deemed safe for them to walk, scoot or cycle independently. In other words, the UK highways system relies on the unpaid labour of adults – mostly women’s time – to address the failings in its provision. Now is an opportunity to factor those potential time savings (and the health, well-being, and child independence benefits) into the transport appraisal equation. We need to quantify the cost savings of creating a city which enables children to walk and cycle independently on the road network.

Given they are less able to judge speeds, anticipate driver actions or negotiate with drivers children have a greater need than adults for clear separation from motor traffic, and clear priority over drivers at intersections including side roads when they are walking or cycling. Also, there needs to be a change in policy on bus routes to keep children - and pedestrians - safe. Powered two wheelers (motorcyclists) pose the second highest risk of any mode so should not be encouraged by being given privileges like using bus lanes. And while the idea of saying bus lanes are also cycle routes is appealing – it ticks both boxes - many parents are not going to let their child cycle if it requires mixing with buses who “pose much the highest risk to others” .

We have seen what happens when you remove the threat of motor traffic – kids emerge onto the streets. As traffic rises, children are being forced to retreat again from civic life. We must intervene.

With plans as they stand, TfL is failing our children and those who look after them. The serious gaps in provision for children could be addressed in two ways. Either TfL updates its Strategic Cycle Network with additional routes focused on secondary schools - and child trips attractors such as sports facilities and parks - so it serves children as well as adults. Or TfL renames the Strategic Cycle Network for what it is – a ‘Strategic Commuting Cycle Network’ and develops a parallel network which covers child travel – a ‘Strategic School Cycle Network’. Embedding cycling from a young age would have massive returns on investment: time savings for adults, improved child health and happiness.

Children rely on adults to create the built environment around them; if adults develop safe streets – with children at the heart of the design - kids could travel independently. Children’s routes would also need clean air, allowing healthy lungs as well as active legs. Now is the time to redesign the city so children can safely breathe and move.