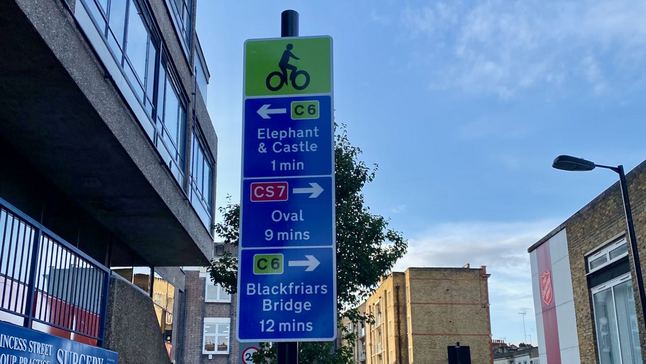 Following our blog on the issue of digital mapping this part looks at the current state of wayfinding.

Signage of cycle routes in London is a mess - there's now a mix of Sustrans National Cycle Network signs, London Cycle Network, the original Cycle Superhighway/Quietway and the new Cycleway signage. London now has LCN5, CS5, Q5 and C5. Quietway route 5 was partly rebranded C5, and Q5 replaced some bits of the old LCN route (but the old signage and paint wasn’t removed where it remains, in weird disconnected sections). What does a 5 painted on the road mean? Answers on a postcard, please. And does anyone understand the point of un-numbered bits of Q or C signage that appear without destinations? So there's a bit of good cycle route there but it's up to you to work out if it takes you anywhere useful. Great.

The newest Cycleway signage (as above) is probably the best London has done. It is clear, easy to read, and generally points you towards the next place along the route that you will have heard of. We also think that using time rather than distance is helpful - junctions influence trip time more than cycling speed in London so this doesn’t vary much between riders.

The new Cycleway signgage does also have a big problem though. Only cycleways which meet TfL's 2019 quality criteria are being renumbered and signed. In theory that makes sense in terms of giving some comfort on the quality of the route. But the quality criteria are still too weak to deliver a guaranteed safe-feeling route for most riders. More to the point, the high quality network is still limited and you actually need to find your way to your destination despite that.

Plus, while TfL's signage guidance says "use of multiple brands can be confusing and misleading for existing and potential customers", there seems to be no real plan to deal with old LCN routes. In theory sections that meet the quality bar could be re-signed but we've yet to see that happen anywhere. More of an issue is that all the old signage on other sections is not being either wholesale removed or maintained, even as routes change or are removed over time. Much of the LCN is now hard to follow (or disappears completely before the signed destination).

Unless something changes, London cycle route signing seems destined to remain ‘confusing and misleading’ for many years yet.

The motor traffic network is signed consistently and comprehensively nationwide. Motorists aren't left with bits of old road numbering systems that no longer continue to their original destination. We need the same for London’s cyclists. Separate quality from signage - give us the equivalent of A and B roads where one is high quality and the other can be upgraded in future (people can use their digital mapping to specify or filter route quality).

There's some urgency to this too. As pointed out in the first part of this blog, London is seeing a lot of new routes and new, confused cyclists. None of the new emergency cycleways are currently signed so how are people supposed to follow them (or in some cases even find their way onto them)? Potential routes are being created through Low Traffic Neighbourhoods too (Lambeth, for example, is prioritising creating “Healthy Routes” between the places people want to go but these dont have route numbers or signage). We need a wayfinding/destination marking system that can cope with this and we need to be able to roll out signage very quickly. 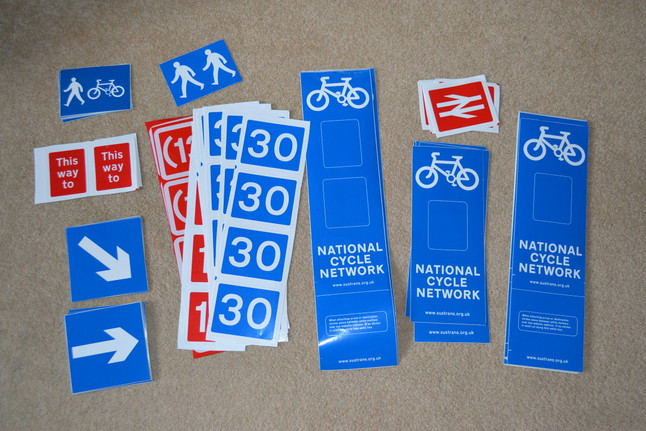 There's precedent - much of the Sustrans National Cycle network is signed with stickers on lampposts. It's definitely not a perfect solution - but it has potential to be rolled out quickly and cheaply (lots of stickers, on lots of lamposts, along a route) ideally coupled with paint on the road in key places. It's also easy to revise if some of the temporary measures are changed - stickers can be removed or new ones stuck over the top.

Once it's in place TfL could then go back and work on implementing full high quality signage over time as the new routes are upgraded and made permanent.