Following yet another fatal collision in the Holborn one way system, hundreds gathered to protest lack of action.

A heartfelt thank you to everyone who turned up in the cold and drizzle to the protest in Holborn last Friday, 4 March. More than two hundred people filled the junction where 39-year-old Shatha Ali was killed earlier in the week while cycling. The protest was reported live by both BBC London and ITV News. With your help, our call for immediate action to fix London’s dangerous junctions – once again – has been made loud and clear – in fact, we have good reason to believe this protest and all the campaigning we have done since Dr Marta Krawiec was killed on the same gyratory only seven months ago, is having an impact on decision-makers

The fatal collision with a lorry happened on High Holborn near the Holborn station junction, just 200 metres south of the junction where Dr Marta Krawiec was killed only seven months ago, and where LCC held its last protest. And Friday’s protest was the same junction where LCC protested after the death of Dr Peter Fisher in 2018.  Eight people have now been killed cycling on Holborn’s dangerous one-way system since 2008.

The two most recent victims were women, and the protest was led by women, some holding a large banner that read ‘Stop Cycling Deaths – Eight Killed in Holborn 2008 – 2022’. After cyclists filled the junction, closing it to motor traffic with the help of the police, two women speakers addressed the crowd.

Eilidh Murray, Chair of LCC’s board of trustees, said:

“Why the endless delays, prevarications and buck passing? Where’s the sense of urgency? Why are junctions modelled to prioritise the internal combustion engine and not to meet the needs all road users, and in particular vulnerable road users? And why do we have to organise protests with such shocking regularity?”

“All of us, whether we are travelling in London or managing the transport network, share a responsibility and a moral obligation to reduce danger and the fear it creates… Let’s see that moral obligation in action.  Let’s see rapid improvements to dangerous junctions.”

Haringey Living Streets activist Catherine Kenyon spoke carrying her baby in a sling: “My daughter is just 2 months now. I don’t want to dread the day when she’s old enough to ask to cycle on her own. It should be a milestone we can all look forward to. Senseless deaths like this are not inevitable. It should be an absolute minimum that every woman in this city has a safe journey to wherever they need to get to. They are choosing a form of transport that is good for them, good for the planet and they deserve so much better from the people designing our streets. I call on all of those in power to stop these deaths, and to make our journeys safe.”

We then held a one-minute silence in memory of Shatha Ali and the seven others who have been killed while cycling on Holborn’s roads. Several of Shatha’s family members and friends were present.

What we want next

Speaking to BBC London News at the event, LCC’S Clare Rogers said, “We are devastated and we are furious that we are here again, just six months after the last fatality… We understand the problem of funding [from the government to TfL], but if there had been a fatality on the bus or tube network, that wouldn’t be tolerated and the funds would be spent immediately. So why is cycling any different?”

We’ve seen that after recent fatalities, particularly at junctions LCC protests at, small changes and temporary or trial measures are put in to fix one aspect of a junction. Why is this only done after a death? Why not before? We know very well which junctions are lethal and likely to kill again. Those temporary, cheap, trial measures should be added urgently to the most dangerous junctions before the next person is killed. When more funding is available the measures can be made permanent. The Mayor needs to show that saving lives is his top priority, above simply keeping the traffic moving, and he needs to do it now.

Sign up to be kept up to date on the latest campaigning news from LCC including on our #DangerousJunctions work. 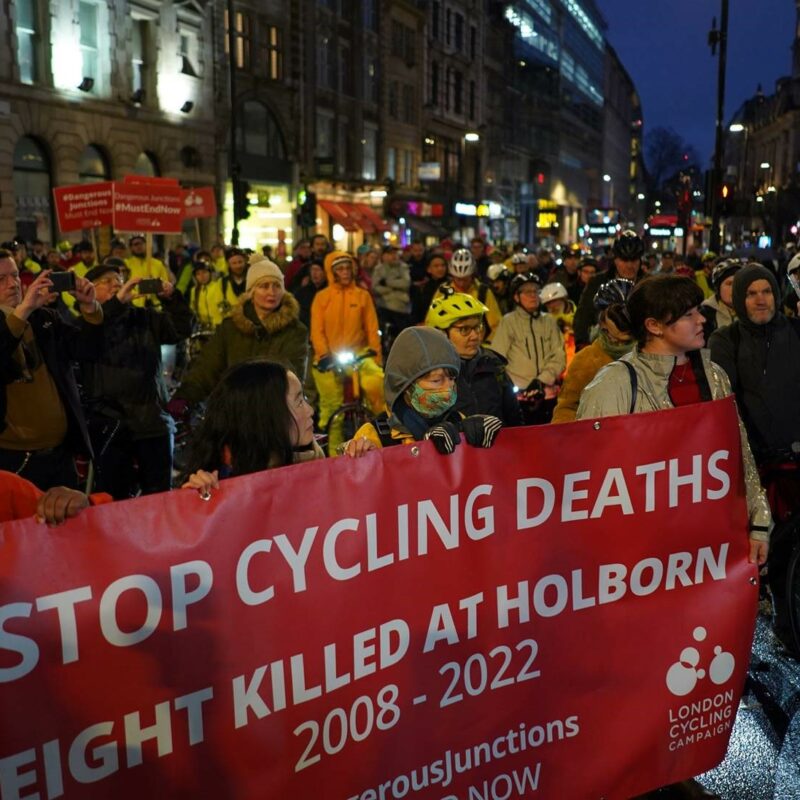