Hackney did just low traffic neighbourhoods for 10 years. The result? 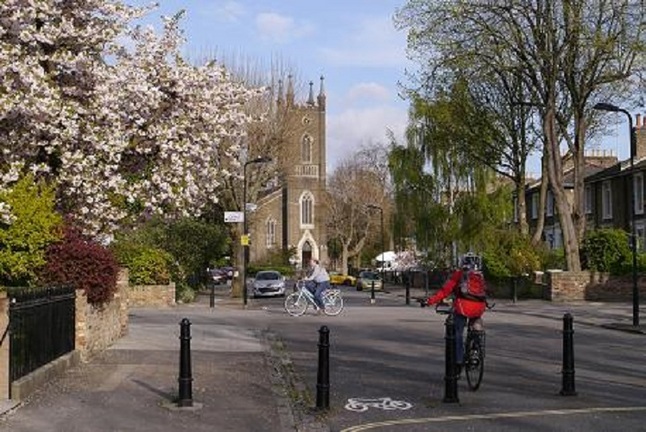 In a ten year period between census dates of 2001 and 2011, Hackney Council focused almost exclusively on low traffic neighbourhood or modal filtering schemes according to a recently unearthed report by noted engineer, Brian Deegan. During that time, cycling trips more than tripled, cycling mode share for work trips more than doubled, and car use halved. In just ten years. From low traffic neighbourhoods.

Deegan’s report, for the Institution of Civil Engineers Engineering Sustainability journal in 2015, titled “Cycling infrastructure in London” assessed the progress and approach each London borough had taken on the LCN+ (successor to London Cycle Network) cycle routes project, as well as other Highways improvements, and compared these to mode share changes picked up by the census data. LCN+ ran effectively from 2002 and 2010.

Between the two census points, Hackney completed the fifth highest percentage of the LCN+ planned network in inner London (75%) but completed the highest rise in cycling trips (232%) for all London boroughs. Hackney’s 2015-2025 Transport Strategy also highlights that between 2001 and 2011 mode share for journeys to work from census data saw motorised modes go from 26.3% to 14.4%, while cycling went from 6.8% to 15.4% and walking from 10.8% to 12.5% (bus, tube, train all essentially remained same). Car driving halved (22.2% to 11.9%) as did car passengers (1.6% to 0.8%) – all motorised modes (taxi and motorbike too) dropped. So motor vehicle use for work journeys halved, cycling, tripled on trips, more than doubled on work journeys mode share. At the same time, the London-wide picture saw motorised work trips go from 25.3% to 19.3%, a drop, but far less of one than Hackney. And cycling went from 1.5 to 2.4%. Hackney outperformed other boroughs significantly on the back of modal filtering.

Deegan’s assessment of Hackney’s approach: “During this period, Hackney developed a unique approach of filtering motorised traffic for the benefit of walking and cycling and this could account for the large increase in the number of people cycling.” Hackney’s focus was on “back street filtered permeability rather than main road and junction interventions” wrote Deegan.

During the period, serious collisions with those cycling in Hackney did rise, and Deegan in the paper suggests that the approach, which avoided main road treatment, was partly to blame. Of course, since then, arguments over main road cycle tracks have played out in Hackney – and the current cabinet there seem far more positive about main road protected space for cycling than before. And since the report, such schemes as well as low traffic neighbourhood schemes have come forward and been built.

Deegan previously worked for TfL and now works for both Urban Movement (he worked on both our joint Engagement and Consultation guide and our Climate Safe Streets report) and Greater Manchester as their transport advisor for Chris Boardman MBE.

Hackney has implemented further modal filters to create Low Traffic Neighbourhoods during 2020 and early analysis shows that they have not caused an increase in traffic on surrounding roads.