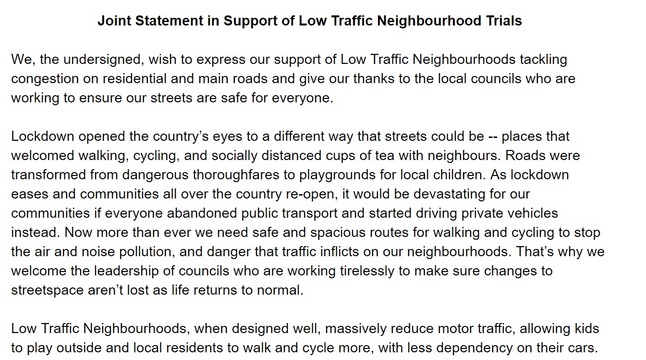 Read the full letter LCC and 132 other organisations have signed in support of l"Low Traffic Neighbourhoods" here and see all signatories to it.

As most of you have probably noticed, the Streetspace Plan for London, the first round of which is being delivered now and through to end September, is causing some waves in London. Amazingly and for once, the most controversy seems to not be around the main road cycle tracks that are rolling out across the capital (although some taxi drivers and radio presenters do, perhaps unsurprisingly, seem annoyed by these too). The main controversy seems to be about the rapid roll-out of "Low Traffic Neighbourhoods" (LTNs) across boroughs.

Fairly unsurprisingly, we're big supporters of LTNs - indeed it's arguable that the guides to creating them that we authored with Living Streets has popularised the current term now used for them. But in the current situation, with LTNs rolling out rapidly as trials across not just London, but by DfT mandate across many other towns and cities in England, 133 active travel, clean air and environmental organisations including London Cycling Campaign and many of our borough groups have signed a letter supporting councils which are rolling these schemes out, bravely, against some coordinated and concerted opposition.

As the letter makes clear, "we hope this is just the beginning of an ambitious plan to transform our streets for the better - with speed reduction, safer crossings, anti-social parking enforcement, protected cycle lanes, controlled parking zones, an increase in cycle parking, parklets, and other incentives to reduce car ownership. We support Low Traffic Neighbourhoods that reduce congestion and air pollution on residential and main roads and we call for more local councils to work with residents to implement them."

One key part of that implementation that has been much criticised is the "lack of consultation". However, as our recent guide to better engagement and consultation with Urban Movement makes clear, the way residents were consulted prior to lockdown wasn't working well, and using trials to enable residents to see past jargon and incomprehensible top-down schema, to experience the scheme in situ, can be a far better way to engage and consult. Residents experiencing a trial scheme are far more able, once the scheme has bedded in, to make an informed assessment of the scheme, and officers are also able to often tweak elements of the scheme in situ to improve it and deal with emerging negative outcomes. This is faster, often cheaper and will as an approach likely lead to fewer cancelled or weakened schemes, as well as likely engaging a wider and more representative slice of residents than the previous approach did.