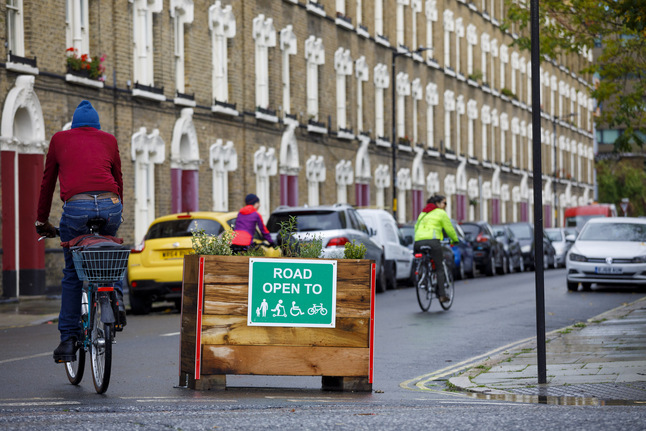 A new study of the rollout of Low Traffic Neighbourhoods (LTNs) by boroughs during 2020 under the Mayor’s “Streetspace” plans, has shown that these schemes delivered positive, socially just outcomes across London. The study was by renowned transport academic Professor Rachel Aldred of University of Westminster’s Active Travel Academy, and colleagues.

The study looked at over 70 new LTN schemes successfully delivered during March-September 2020 and still in place in October. Topline results were:

How the study was done

The study matched Census “Output Areas” (OAs) of around 300 people to areas inside or mostly inside LTN schemes (following a “sensitivity analysis that found a near-identical distribution of demographic and socioeconomic characteristics when focusing only on OAs 100% inside an LTN”) and to areas within 500m, and matched these areas to Census 2011 data on age, ethnicity, disability, employment and car ownership, as well as to the Index of Multiple Deprivation 2019 data. The study also “compared individuals living in OAs 100% inside an LTN with individuals living in OAs that were 0% inside an LTN but that touched an LTN boundary road.”

What was notable from the study, apart from the clear implication that LTNs put in during Streetspace were socially equitable, was the variation of schemes by borough. Ten boroughs did no new schemes during the study period, and two (Redbridge and Wandsworth) ripped theirs out. However, of the remaining 21, the amount done and the level of social equity delivered varied hugely.

Greenwich only covered 1% of residents, Hackney covered 17%. And Hackney’s schemes were more strongly socially equitable, while Lambeth, Croydon, Harrow, Brent and Waltham Forest’s were clearly socially equitable too. However, Ealing, Lewisham, Enfield, Greenwich and to a lesser extent Hammersmith & Fulham’s were less so, with Islington and Hounslow delivering socially just LTNs on indices of deprivation, but less so on BAME populations.

The report highlights that some of the overall result here is on the basis that those boroughs with the wealthiest residents, with a lower proportion of BAME people, often did no LTNs at all; and that some of the variation by boroughs is down to political approach and on-the-ground specifics. For instance, “the selected areas in Enfield included good public engagement; creating a more coherent cycling network; and 'equity by road type' in the sense that that the boundary roads surrounding LTNs had themselves benefited from interventions… Enfield's planned 2021 LTNs will substantially redress this by focusing on poorer parts” of the borough. The role of implementing schemes in a crisis is also mentioned: “The LTNs implemented first may… have been ones that happened to be easiest… to do quickly, rather than reflecting… fuller plans for further measures.”

What does all this mean?

It means that LTNs aren’t going in in areas vastly different from the neighbourhoods around them. It means these aren’t schemes for affluent white folks at the expense of poor Black, Asian or other ethnic minority Londoners.

This evidence sits alongside evidence on the long-term positive impacts of LTNs and indeed the lack of long-term negatives. Remember, these are schemes that reduce car use and ownership, cut crime, pollution (including on nearby main roads), don’t worsen congestion on nearby main roads and increase walking and cycling rates, as well as community connections.

Probably the most important thing however to take from this study is that there are lots of boroughs failing to deliver LTNs – and the very same boroughs are almost universally failing to deliver other schemes, including main road schemes too. It is clearly vitally important that those boroughs that are delivering LTNs deliver ones in a socially just manner – that prioritise those worst impacted by the effects of motor traffic and least able to avoid such effects. But it’s also vitally important that every London borough gets on with reducing motor traffic across London fast.

How do we best get progress for our communities? Not by fighting for nothing. But by making what is done as good as possible and getting more of it fast. The roll-call of boroughs that failed their residents during Streetspace on LTN delivery is: Barking and Dagenham, Barnet, Bexley, Bromley, Haringey, Havering, Hillingdon, Kensington & Chelsea, Redbridge, Wandsworth and Westminster. Of course, that roll call is almost identical to the roll-call of boroughs that have done virtually nothing to curb car use and enable more walking and cycling for many years.

Of those boroughs, Barnet did implement the A1000 cycle tracks, but TfL does appear to have done most of the work on that; Haringey are now beginning to move on schemes, but during Streetspace thus far delivered a small amount of cycle track with car parking in using “mini orcas”; Kensington & Chelsea ripped their cycle track out etc. The reality, clearly, is those boroughs with the political will to deliver LTNs are generally moving to do so in a socially equitable manner – the boroughs without any political will don’t just fail to deliver LTNs – they fail to curb motor traffic for any of their residents.

As our Senior Infrastructure Campaigner, Simon Munk, says in The Guardian today: “The damaging impact of unnecessary motor traffic across London is felt unequally, and schemes like these help address this.”