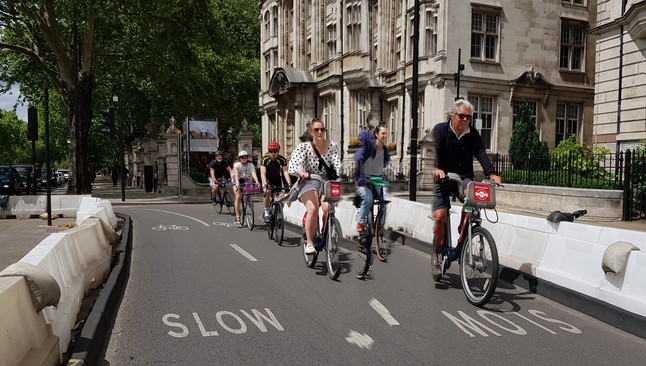 The DfT and TfL have funded a wave of crisis-response “Streetspace” schemes. Their aim is to try and get some of the people who are avoiding public transport to also avoid cars as their go-to for journeys in London and use cycling or walking instead. If even a few percent of people shift from buses and tubes to cars, we’re all stuffed – and the signs are that is happening right now.

Some areas in London, we’re hearing are already significantly over pre-lockdown levels of motor traffic, and that’s before we see most people going back to office life. Obviously there’s a big question mark over how much commuting we’ll see medium and long term – many people don’t seem to be going back to central London at all, others look set to arrive and depart out of peak or only go in on some weekdays. But again, despite that, many are predicting that enough of the commuting and non-commuting trips will switch to cars that we’ll be utterly gridlocked. And that does appear to be happening in some areas already – although it’s too early to tell for sure, and traffic patterns are all over the place.

The first round of funding for schemes finishes at the end of September. So if you borough has schemes on this list that aren’t done yet, please get your local group to contact the council and ask where those schemes are, urgently!

The second round of funding is being decided on right now, and we’re expecting an announcement soon, but schemes are then to be delivered by the end of financial year. So that gives boroughs a bit more breathing space to monitor round 1 schemes, let them settle, tweak and improve them, and then learn from them for round 2. We’re also hearing round 2 schemes might be more permanently minded and indeed bigger and bolder – these “temporary plus” schemes could for instance include changes to junction designs and signals that have been largely avoided in round 1.

Of course, the round 2 schemes and further work from TfL also probably relies on a funding approach being agreed between the DfT, government, TfL and the Mayor. TfL’s finances have a massive hole, and we’re one of the only big cities in the world that receives no fundamental subsidy from government. So we wait with baited breath to see the result of the sadly clearly political negotiations happening.

The political posturing around London’s transport is doing no one any favours. The Conservative government is being bolder on walking, cycling and transport than ever before, as is London’s Labour Mayor. Both are promoting the rapid roll-out of temporary schemes taking roadspace from cars and giving it to walking and cycling during this crisis and beyond. And Conservative, Labour, Green, Lib Dem – all mainstream politics are broadly in alignment on cycling, walking, active travel, climate, public transport, car use. Yet on a regional and local level we’re seeing all stripes of politicians oppose and attack schemes, diverge wildly from party policy etc. Why? Because they’re getting shouted at by a minority of very vocal residents.

Who is against the schemes?

Who is doing the shouting? For the most part, drivers who’re being inconvenienced (often just temporarily, as schemes bed in). Most voluble? As ever, sadly, taxi drivers – who can’t seem to grasp the opportunity lower car ownership and use presents them, or the real, far bigger threats to their livelihoods – are leading the charge, it would appear, aided and abetted by politicians such as London Assembly member David Kurten (independent, ex-UKIP) and far-right campaigners.

These are joined by other professional and local drivers but also many local residents, for some of whom are angry about (again likely temporary) driving inconvenience, but others who have concerns and fears around the scheme, some real and some more mythical – often fed by those determined to undermine the scheme. Our new mythbuster and beat the “bikelash” page aims to give local groups a good set of answers to rebut most of such worries.

What schemes are going in?

In your area, you’re likely to have seen pavement widening schemes going in on shopping streets first, some very soon after lockdown. Many boroughs are now removing these, and some are reinstating parking too. While the barriers used were themselves barriers to people crossing the road, and the schemes were sometimes underused and confusing, as well as failing to provide well for disabled people, in other areas semi-permanent schemes using quick-laid asphalt have worked really well at claiming space from roads for people walking – and we’d like to see a lot of these schemes upgraded rather than just scrapped.

On top of these, the most visible other schemes are main road cycle tracks with those cycling protected by “wands”, plastic posts bolted into the road; and “Low Traffic Neighbourhoods” (LTNs). These latter are proving even more controversial than cycle tracks (but yes, cycle tracks also are remaining controversial too).

Hopefully it doesn’t need much explanation as to why cycle tracks are important these days – simply put, most people won’t cycle without these; put them in and suddenly you’ll see women and kids riding where you didn’t before. However, missing long-term from most of the cycle track schemes is junction treatments – and this will be an increasingly pressing issue if we are to see lots more people cycling, new people cycling and yet cars able to too easily turn across the paths of forward moving cyclists.

LTNs are the more complex issue. Residential areas closed off with bollards, planters and number-plate ANPR cameras – to get rid of ratrun/through motor traffic. Councils are scrambling to learn how to deliver these, they’re hard to understand until you’ve experienced them and they can (like cycle tracks) cause (mostly) temporary traffic chaos. So why do them? Because the results for these are mostly fantastic.

By making residential areas no use to through motor traffic you not only massively reduce the motor traffic on these streets, you also reduce motor traffic levels overall. This is “traffic evaporation”. Ratrun traffic is diverted onto nearby main roads. For a month or three these main roads bung up. Which is horrible. But then gradually, folks start to change their habits. This is well evidenced and documented. Drivers give up and stick to bigger main roads, drive outside the area, or they just give up and take the tube, or cycle, or don’t do the journey. Similarly, residents inside an LTN over time (according to research from Dr Rachel Aldred, University of Westminster) also ditch the car more often. That ten minute journey becomes 15 minutes, but it’s now only ten minutes on quiet roads to cycle, or 20 to walk. So people switch. LTNs like main roads also unlock cycling for lots of people you otherwise just don’t see in London on bikes – kids riding independently, women in hijabs, parents on cargo bikes etc. But these schemes do have a pain barrier, and lots of London is going through that right now.

School Streets are also going in – they’re like time-limited LTNs – stopping motor traffic from driving onto or along streets where primary schools are. There are hundreds of these schemes and hundred of LTN filters going in between now and the end of September in an attempt to curb the worst of the car school run, and get kids and parents travelling actively.

The 'new normal' needs time to bed in

As above there’s a lot of these schemes going in right now, many of them imperfectly designed or communicated by councils struggling to deliver at pace. Many will need further additions or tweaks once they’ve settled and been monitored. And there’ll be a round 2 to contend with too. All of that adds up to a lot of chaos, right now.

We know that significant parts of London without schemes are seeing traffic levels above pre-lockdown levels. We know the pattern of commuting and movement in London is changing daily as schools go back without free bus travel and parents go back to work. We know that some schemes are indeed also displacing significant amounts of traffic onto other areas, main roads etc. What do we not know? How this all settles down – what the “new normal” London looks like, and therefore which schemes will need tweaks etc. But we also know that forward progress is far more important than just about anything else.

We know that we face not just a respiratory crisis, possible second wave and need for safe social distancing, but even bigger, ongoing crises of pollution, inactivity, climate, road danger. These are with us constantly, have been for decades, and climate of course has a very limited time for us to take action on or the consequences globally will be disastrous for all future generations. The idea that we can sit back and do less in this crisis has been comprehensively debunked by our work with the Healthy Streets Borough Scorecard. This shows that in the year before Covid-19, even the boldest and bravest boroughs were not doing enough to hit targets to make climate safe, and safe, streets. The future isn’t to go slower and get everything perfect, or to let the shoutiest of residents in an area dominate every issue. The future has to be bold, rapid progress to decarbonise transport in London and get rid of the majority of motor traffic journeys, that TfL says could be done by other modes, other ways.

In short, if you think the change in London is fast now, it’s going to calm down in a couple of months, but hopefully not slow down much.