Protected space in London tripled, thanks to LCC 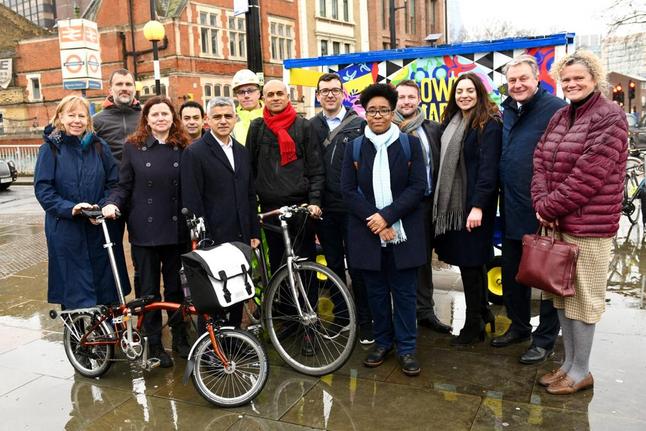 The Mayor of London, Sadiq Khan, has announced this morning that he has tripled the mileage of protected space for cycling in London since his election to 162km (counting each direction).

“In 2016, the London Cycling Campaign called on the mayor, Sadiq Khan, to triple the amount of protected space for cycling in London within one mayoralty,” said Dr Ashok Sinha, CEO, London Cycling Campaign. “We know that fear of collisions is the main reason more people don’t cycle; we also know that a mass shift to cycling is essential to help address the climate emergency. So we congratulate Sadiq, and his Walking & Cycling Commissioner, Will Norman, on reaching this important milestone. It makes London safer for cycling and will help more people to reduce their carbon footprints by getting on the bikes”

Sadiq and his commissioner haven’t just tripled protected space for cycling in London in four years. Sadiq has also produced funding criteria for its rebranded Cycleway network of main road tracks and quieter routes. This has decisively ended the “blue paint” era on main roads (but has to be improved in order to avoid using heavy ratruns as cycle routes). And ensured boroughs know they need to deliver good schemes to get funding.

As a result, they’ve spread safe cycling routes further into outer London. While boroughs like Waltham Forest, Enfield, and Camden, who were already delivering cycle tracks, have accelerated their progress, they’ve also been joined by boroughs such as Lambeth, Hounslow and Newham. Next? A joined-up network of routes that enables far more people to go from front door to office or shops without ever facing hostile driving and dangerous road conditions.

This will be key to enabling many more Londoners to cycle, and enabling our city to play its part in avoiding the worst of climate breakdown. A network of truly safe, comfortable and direct cycle routes is what has been needed to get other cities to mass cycling levels. That’s why one of the key pledges we will be asking Sadiq and the other Mayoral candidates to commit to in the run-up to the upcoming elections in May will be the rapid expansion of the cycle network, alongside other improvements to ensure by 2030 our roads transport system is carbon neutral. Watch this space for more on our campaign, launching soon! 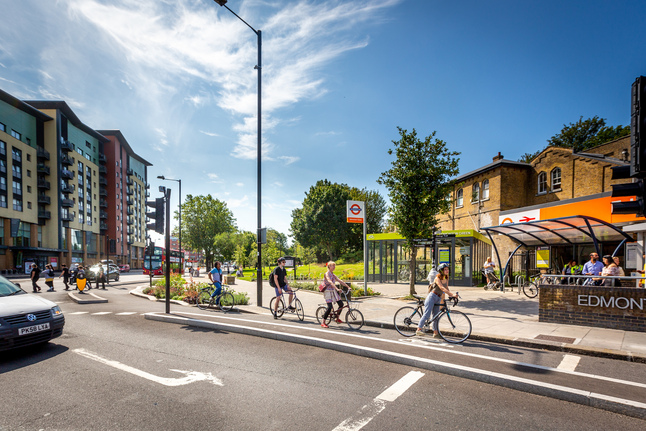 The Mayor of London, Sadiq Khan, and Transport for London (TfL) have announced that the amount of protected space for cycling in London that is either complete or under construction has reached a total of 162km – more than triple the amount compared to May 2016.

In 2016, Sadiq Khan pledged to triple the amount of protected space for cycling by May 2020 – a commitment which he has delivered and exceeded ahead of schedule. Protected space for cycling includes both full and semi-segregated cycle lanes along with stepped tracks, which keep people on bikes separated from motor traffic, reducing the risk of collisions and making cycling more accessible and convenient.

To mark the milestone, Sadiq today met construction workers in Lambeth who are building protected space for cycling along Baylis Road as part of Cycleway 5 between Waterloo and Clapham.

The Mayor is committed to further expanding London’s network of cycle routes, building on his record investment which has led to record cycling numbers across the capital. The total distance cycled in London on an average day in 2018 exceeded 4 million km for the first time, the highest figure since monitoring began in 2015 and an increase of almost five per cent from the previous year. Growth in cycling was particularly strong in central London, where the number of cycling trips increased by more than five per cent. There was also strong growth in outer London, with an increase of six per cent.

Laid end to end, the 162km of protected cycle lanes would stretch from Leicester Square to New Street station in Birmingham.

Construction work is currently underway across London to make cycling easier and safer including:

Since 2016 more than 40km of protected space has been added through the Mini-Hollands programme, which includes Waltham Forest’s award-winning cycle network, Kingston’s Go Cycle scheme and Cycle Enfield.

Last year a new route through the heart of London, Cycleway 6, opened between Elephant & Castle and Kentish Town. The number of people using this new route since it was completed grew by 115 per cent between September 2018 and September 2019.

TfL research has shown that fear of collisions is one of the biggest factors putting people off cycling more often for their everyday journeys. TfL and the Mayor have committed to strict new standards for the capital’s network of high-quality Cycleways, based on the latest evidence, with a focus on traffic volumes and speeds, to give people the confidence that all routes will be safe and fit for purpose. 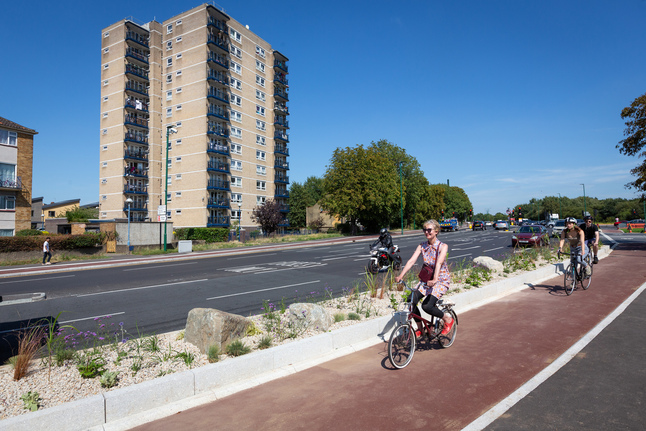 I’m really proud to have tripled the amount of protected space for cycling – making it safer and more convenient for Londoners across our city to cycle as part of their everyday routine. My record investment to enable more people to cycle is vital to tackle some of the biggest challenges our city faces - including the climate emergency and our toxic air – and has led to record cycling numbers. I’m determined to build on this success which is why I’m committed to expanding our network further so that even more Londoners can enjoy using our high-quality cycleways to get around the city,"

Sadiq Khan, The Mayor of London.

I’m delighted that we have achieved our target of tripling protected space for cycling ahead of schedule. It’s clear that where we have built new high-quality infrastructure more Londoners are choosing to cycle, and our continued investment in a city-wide network will help support people of all ages and abilities to take to two wheels,"

Enabling more people to cycle and walk more often is vital to supporting London’s growth and ensuring that the capital is a clean, healthy and sustainable place to live, work and visit. We’re determined to make sure that neighbourhoods across London have access to safe, high-quality cycle routes and continue to build a network of Cycleways that everybody can use to get around the capital,"

Protected space for cycling is absolutely vital in encouraging younger and more inexperienced riders to take up cycling. Keeping vulnerable road users safe by separating them from general traffic on our main roads, coupled with removing rat-running and traffic from our residential streets, will create the conditions for everyone to feel comfortable in making cycling a part of their everyday life. I am really pleased that we have got a London Mayor who is putting his money where his mouth is and who is backing councils like ours in Lambeth with the money to deliver miles of new protected healthy routes so people can walk and cycle more,"